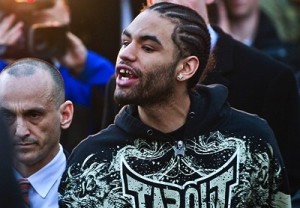 Authorities accused Luis Ortiz of shooting Shannon McKinney six times on Jan. 1, 2012, and shooting Officer Kevin Brennan in the head on Jan. 31, 2012, in an attempt to evade capture.

Brennan suffered mild brain damage from the bullet, which mostly caused a loss of some peripheral vision.

Ortiz faces life in prison without parole. Sentencing has been scheduled for July 23.

Police officials said Brennan and two other plainclothes officers were responding to a report of shots fired at a public housing development when they encountered three people running from a building.

Ortiz was among those who fled and Brennan pursued him around the back of the building at the Bushwick Houses development, where the two squeezed through an open emergency exit before it shut behind them. The two other officers who responded with Brennan were trapped outside.

Surveillance video showed Brennan in a headlock, then being shot in an alcove and lying unmoving while the suspect flees.

After the gunman fled, the two officers pried open the emergency door, saw Brennan and called for an ambulance. There was no time to send the officer to the operating room so doctors pulled the bullet from his head in the emergency room.