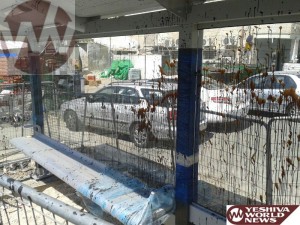 This week’s vandalism attack in the Geula area of Yerushalayim which left a number of new bus stops significantly damaged appears to be the work of frum fanatic elements, at least according to a report in the daily Maariv.

It appears that there was an agreement by which the new bus stops would only offer folding benches, apparently viewed as being more modest and therefore acceptable. After the new bus stops were installed with standard benches, “extremists in the area” decided they were unacceptable and they felt destroying them was the appropriate response. The article quotes officials in the community minhal (administration) anonymously, pointing an accusing finger at the zealots.

It is explained that the folding benches would presumably prevent males and females from congregating at these bus stops, in the heart of a chareidi area of the capital. Binyamin Machlev, who is responsible for transportation services for the local administration, the damage amounts to hundreds of thousands of NIS. Council members are calling upon community residents to provide information to assist in bringing the responsible persons to justice.