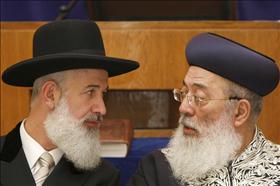 As Israeli internet forums began passing along the rumor that HaGaon HaRav Tzion Boaron was going to drop out of the Chief Rabbinate race, officials working with the rav to become the next Rishon L’Tzion released a message that the rumors are baseless. They stated the rav feels he has a good chance of being elected.

The rav is fighting an uphill battle as the rumors against him continue. The rav is also under significant pressure from Shas officials to step down from the race for Shas leaders realize his candidacy and votes received may be at the expense of Rav Avraham Yosef.