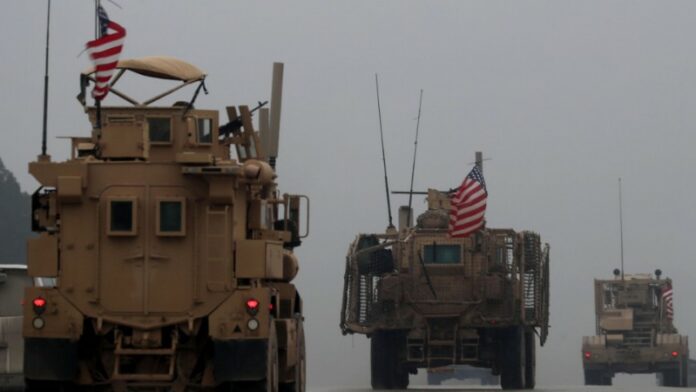 President Donald Trump on Monday defended his decision to pull back U.S. troops from northern Syria, clearing the way for an expected Turkish assault and essentially abandoning Kurdish fighters who fought alongside American forces to defeat the Islamic State.

The decision sent shockwaves through the region and Washington, with U.S. officials telling Fox News that top Pentagon officials were “completely blindsided” and “shocked” by the order to pull back hundreds of U.S. troops, a move that effectively green-lights the Turkey operation. President Trump spoke with Turkey’s President Recep Tayyip Erdogan by telephone.

The move drew immediate outrage from some of the president’s closest allies in Congress, with Republican Sen. Lindsey Graham calling the decision “a disaster.” And Syria’s Kurds accused the U.S. of turning its back on its allies and risking gains made in the fight against the Islamic State group.

Trump, however, defended the move in a series of tweets Monday, acknowledging that “The Kurds fought with us,” but claiming they “were paid massive amounts of money and equipment to do so.”

“I held off this fight for almost 3 years, but it is time for us to get out of these ridiculous Endless Wars, many of them tribal, and bring our soldiers home,” he wrote, adding that, “WE WILL FIGHT WHERE IT IS TO OUR BENEFIT, AND ONLY FIGHT TO WIN.” He said it will now be up to the region to decide what to do with captured IS fighters, and warned of retribution in response to any future attacks.

“We are 7000 miles away and will crush ISIS again if they come anywhere near us!” he wrote.

The United States was supposed to be in Syria for 30 days, that was many years ago. We stayed and got deeper and deeper into battle with no aim in sight. When I arrived in Washington, ISIS was running rampant in the area. We quickly defeated 100% of the ISIS Caliphate,…..

…..again said “NO,” thinking, as usual, that the U.S. is always the “sucker,” on NATO, on Trade, on everything. The Kurds fought with us, but were paid massive amounts of money and equipment to do so. They have been fighting Turkey for decades. I held off this fight for….

…figure the situation out, and what they want to do with the captured ISIS fighters in their “neighborhood.” They all hate ISIS, have been enemies for years. We are 7000 miles away and will crush ISIS again if they come anywhere near us!

Turkish President Recep Tayyip Erdogan has threatened for months to launch the military operation across the Syrian border. He views the Kurdish forces as a threat to his country. Republicans and Democrats have warned that allowing the Turkish attack could lead to a massacre of the Kurds and send a troubling message to American allies across the globe.

U.S. troops “will not support or be involved in the operation” and “will no longer be in the immediate area,” in northern Syria, White House press secretary Stephanie Grisham said in an unusual late-Sunday statement that was silent on the fate of the Kurds.

There are about 1,000 U.S. troops in northern Syria, and a senior U.S. official said they will pull back from the area — and potentially depart the country entirely should widespread fighting break out between Turkish and Kurdish forces.

House Minority Leader Kevin McCarthy, R-Calif., said Monday in an appearance on “Fox & Friends” that he had not spoken with Trump about the decision and had concerns.

“I want to make sure we keep our word for those who fight with us and help us,” he said, adding that, “If you make a commitment and somebody is fighting with you. America should keep their word.”

One of the show’s hosts, Brian Kilmeade, asked McCarthy to try to intervene and “call the president before it’s too late.”

Graham, R-S.C., one of Trump’s most vocal backers, also weighed in via tweet, saying that, “If press reports are accurate this is a disaster in the making.” He also called in to “Fox and Friends” to share his dismay, calling the decision “short-sighted and irresponsible.”

“This impulsive decision by the president has undone all the gains we’ve made, thrown the region into further chaos. Iran is licking their chops. And if I’m an ISIS fighter, I’ve got a second lease on life,” he said. “I like president Trump. I’ve tried to help him. This to me is just unnerving to its core.”

By abandoning the Kurds we have sent the most dangerous signal possible – America is an unreliable ally and it’s just a matter of time before China, Russia, Iran, and North Korea act out in dangerous ways.

I feel very bad for the Americans and allies who have sacrificed to destroy the ISIS Caliphate because this decision virtually reassures the reemergence of ISIS. So sad. So dangerous.

I don’t know all the details regarding President Trump’s decision in northern Syria. In process of setting up phone call with Secretary Pompeo.

If press reports are accurate this is a disaster in the making.

The announcement followed a call between Trump and Erdogan, the White House said Sunday.

The decision is a stark illustration of Trump’s focus on ending American overseas entanglements — one of his key campaign promises. But his goal of swift withdrawals in Syria, Iraq and Afghanistan have been stymied by concerns from U.S. officials and American allies about the dangerous voids that would remain.

As he faces an impeachment inquiry at home, Trump has appeared more focused on making good on his political pledges, even at the risk of sending a troubling signal to American allies abroad.

We must always have the backs of our allies, if we expect them to have our back. The Kurds were instrumental in our successful fight against ISIS in Syria. Leaving them to die is a big mistake. #TurkeyIsNotOurFriend

In December, Trump announced he was withdrawing American troops from Syria but was met with widespread condemnation for abandoning Kurdish allies to the Turkish assault. The announcement prompted the resignation in protest of then-Defense Secretary Jim Mattis, and a coordinated effort by then-national security adviser John Bolton to try to protect the Kurds.

Since January, U.S. officials have tried to broker the creation of a “safe zone” in northern Syria to provide a security buffer between the Turkish military and Kurdish forces, but Turkey has repeatedly objected to its slow implementation.

Turkey considers the People’s Protection Units, or YPG, an extension of the Kurdistan Workers’ Party, or PKK, which has waged an insurgency against Turkey for 35 years. The White House announcement Sunday came a day after Erdogan offered the strongest warning yet of a unilateral military operation into northeastern Syria, as the Turkish military has been dispatching units and defense equipment to its border with the area.

The Kurdish-led Syrian Democratic Forces threatened to respond forcefully to any Turkish incursion.

“We will not hesitate to turn any unprovoked attack by Turkey into an all-out war on the entire border to DEFEND ourselves and our people,” SDF spokesman Mustafa Bali tweeted Saturday.

A Kurdish official speaking on condition of anonymity because he’s not authorized to brief reporters said Monday they expect a limited Turkish operation and are still working to ascertain what will happen with American forces in the region. The official said the view is that Kurdish-led forces have a legitimate right to self-defense.

A senior U.S. official said Sunday that American troops will pull back from the security zone in northeastern Syria, where they have been working with Turkish troops, to an unspecified out-of-the-way location. There have been U.S. troops around Manbij.

The official added that if Turkey goes ahead with the incursion into Syria, it is expected to trigger a large combat response from the SDF, and U.S. troops will almost certainly withdraw completely from Syria. The official spoke on condition of anonymity to discuss internal deliberations.

U.S. defense leaders have long known that America would not get into an all-out war with Turkey, a NATO ally. But that has been stalled until now by aggressive negotiations by the U.S., urging Turkey against invading. The official said senior leaders never believed that the U.S. would go to war to save the Kurds, but just hoped to put off that scenario.

Mattis and other Pentagon leaders had worried that withdrawal would lead to a resurgence of IS in the country, particularly if the SDF abandon the prisons holding the fighters to battle Turkey.

The White House said Turkey will take custody of foreign fighters captured in the U.S.-led campaign against the Islamic State group who have been held by the Kurdish forces supported by the U.S.

Ambassador James Jeffrey, the State Department envoy to the international coalition fighting the Islamic State group, and Trump have said the Kurds have custody of thousands of captured Islamic State militants. They include about 2,500 highly dangerous foreign fighters from Europe and elsewhere whose native countries have been reluctant to take them back and another 10,000 or so captured fighters from Syria and Iraq.

Trump has repeatedly demanded that European countries, particularly France and Germany, take back their citizens who joined the militant organization.

Kurdish officials have expressed concerns of a possible breakout by IS prisoners in case of fighting in the area. In a recently released audio recording, IS leader Abu Bakr al-Baghdadi called on members of the extremist group to do all they can to free IS detainees and women held in jails and camps.

IS was defeated in Iraq in 2017. In Syria it lost its last territory in March, marking the end of the extremists’ self-declared caliphate. Despite these battlefield defeats, IS sleeper cells have continued to launch attacks in both Iraq and Syria.