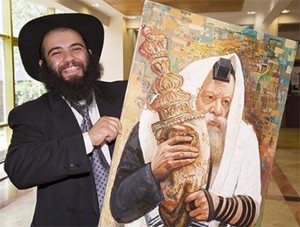 Rabbi Ovadia Isakov, 40, Chabad-Lubavitch emissary and chief rabbi of Derbent in the Republic of Dagestan, is much improved following emergency surgery for injuries to his internal organs after being shot by assailants near his home.

Doctors at Beilinson Hospital in Petach Tikvah, Israel, have reported that the complex operation went “very well,” and the bleeding in the rabbi’s liver has stopped. Isakov’s condition has been upgraded to “satisfactory,” and he was conscious as of Friday evening.

Hours after initial surgery in Derbent, the rabbi was flown to Israel in a chartered emergency rescue plane, accompanied by a team of doctors and paramedics. The rabbi was first transferred by helicopter from the hospital in Derbent to the airport in Makhachkala, nearly 200 miles away.

The flight was arranged by Rabbi Berel Lazar, the chief Rabbi of Russia, working with the international unit of the ZAKA emergency service team in Israel. It was funded by the Federation of Jews in the Commonwealth of Independent States, or CIS.

Lazar noted that “this is not the first time terrorists have selected religious individuals for their attacks,” and condemned those “whose only goal is to kill innocent people, especially those who live in a world of eternal values, morality and spirituality.”

He thanked the doctors, who he said were doing everything in their power for Isakov, and wished “a speedy recovery for the victim, and support for his wife and children.”

The rabbi was returning from performing a ritual slaughter for kosher meat when he was attacked as he stepped out of his car. Local officials were investigating conflicting reports that either one or three assailants were involved in the attack. Russia’s Investigative Committee said in a statement that the rabbi’s Jewish appearance “is among the possible motives investigators are considering for the attack.”

Those involved escaped from the crime scene.

The acting head of Dagestan, a majority Muslim territory bordering Azerbaijan, condemned the attack, blaming it on “extremists and terrorists.”

Dagestan’s government has declared that the shooting was performed by a member of one of the most extreme Islamic terrorist groups in the Chechnya-Caucasus area.

The information was delivered to Rabbi Ahron Gurevitch in a special meeting with the president of the Dagestan district of Russia, Mr. Megomdov, which promised to do everything possible to capture the terrorist and insure the continuation of Jewish life in the district.

A native of Derbent, Isakov is described by friends as “an artist, a very peaceful man.” Following years of rabbinic study in Moscow, Isakov returned to the city nine years ago with his wife, Chaya Miriam, as Chabad-Lubavitch emissaries.

In his comments to Lubavitch.com, Rabbi Yehuda Krinsky, chairman of Merkos L’Inyonei Chinuch, the educational arm of Chabad-Lubavitch, asked that the international community pray for the recovery of the Chabad emissary. (It is customary to recite Psalms, particularly Psalm 20, with prayers for a complete recovery using the victim’s Hebrew name and the name of his mother: Ovadia ben Zahava Chaya.)

“We should never take for granted the selfless dedication that shluchim exercise every day in their commitment to serving the Jewish people,” said Krinsky, “especially when that entails the kinds of sacrifices that Rabbi Isakov and his family have made in choosing to fulfill the noble calling of serving as Chabad representatives.”

This was not the first time Isakov has been the target of an attack. In 2007 his home was vandalized by assailants in the morning hours, while the rabbi, his wife and children, including a 9-month-old baby, were in their bedrooms.