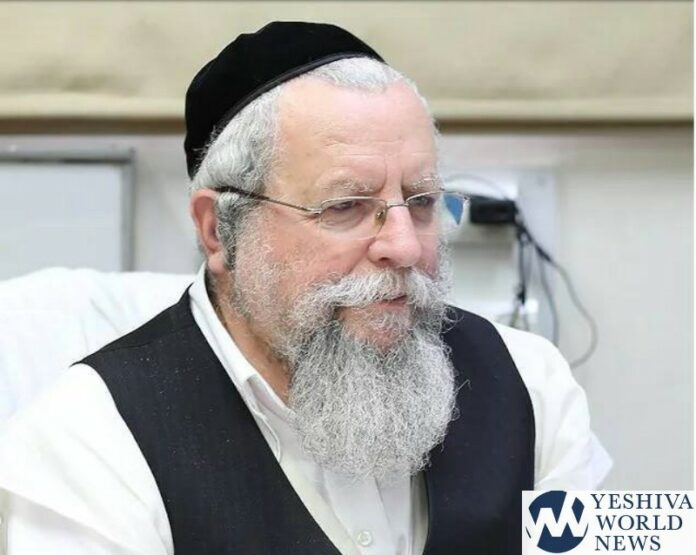 Rav Elimelech Firer has been providing lifesaving assistance to millions of Israelis for 40 years through his medical assistance organization Ezra U’Marpe. Recently, Rav Firer canceled a much-needed fundraising event after it sparked a media storm due to feminists protesting the lack of female singers at the event due to Rav Firer’s request. The criticism and resulting cancellation of the event caused a stir among the Israeli public, where Rav Firer is widely respected and revered for his lifesaving work across all sectors of the Israeli public.

The fundraising event was intended to raise emergency funds for Ezra U’Marpe, which currently owes heavy debts of NIS 14 million. In the wake of the canceled event, thousands of Israeli donated to Rav Firer’s organization, Ezra U’Marpe, through an online emergency fundraising campaign. Israeli performers, religious and secular alike, encouraged the public to donate.

An interview with Rav Firer’s assistant for 40 years, Yonah Tillman, on Arutz Sheva in the wake of the furor, revealed Rav Firer’s arduous daily schedule, the moving extent of his sacrifice for the Jewish people without regard to their level of observance and fascinating stories about his lifesaving work and expertise.

Tillman told Arutz Sheva that although thousands of people have donated to the online campaign, they are still short of their goal of NIS 7,000,000 by Monday night.

Tillman described the broad extent of Ezra U’Marpe’s operations, manpower, institutions and equipment. “Ezra U’Marpe has 246 employees, 460 volunteers, 19 ambulances that are used 12,000 times annually – taking people who need treatment to hospitals and have no ability to pay for the ambulance ride to the hospital, and everything is free of charge. It loans medical equipment worth $4 million without regard to sector or gender. One day, an Arab from Gaza came and asked for medical equipment. They deliberated, asked Rabbi Firer, he said to give it to him and if he didn’t return it, it means he wasn’t able to.”

“The organization has two rehabilitation centers in Sderot and Bnei Brak. The center in Sderot was set up according to the needs of the southern region, the Gaza envelope, etc. Both centers have multi-million dollar hydrotherapy pools.”

“We don’t utilize these things for public relations – it doesn’t photograph well. These are unfortunate people. Those who come to the rehabilitation centers are people who have received treatment and haven’t yet recovered. Rabbi Firer saw the terrible distress of these people and worked tirelessly to set up these two centers with the most expensive equipment and the most skilled manpower. Everything is provided free of charge.”

“We receive donations regularly during the course of the year but our activities have expanded. For example, two and a half years ago, a neurological department manager came to Rabbi Firer and said there was an assistive therapy for Parkinson’s patients that would prevent further deterioration and improve quality of life. There is one place in Italy that provides the treatment. The doctor wanted to perform the treatment in Israel but the Health Ministry said that they don’t have the budget for it. The treatment involves hospitalizing the patients for three weeks. Rabbi Firer responded that they’ll do the treatment as outpatient treatment in a rehabilitation center. 120 hours of treatment will be given to 20 patients in each round. So far, around 300 people received the treatment. This cost us NIS 1,200,000. This is why we need money.”

“Someone once called and says his wife is pregnant and they found a tumor on her liver. The doctors said they need to abort and instructed them to have it performed the next morning already since the pregnancy was threatening the woman’s life. Rabbi Firer called a certain doctor and told him that he’s sending him a patient tomorrow morning and he should check her immediately since he wants to save the baby. The hospital was opposed to releasing her and they made them sign a document that they’re leaving against their medical advice. She went to the other doctor who performed an operation to remove the tumor. Later, she had a healthy baby girl.”

Tillman emphasizes that it wasn’t Rabbi Firer who was interested in the event. “Everything about the event is foreign to the Rav who is completely detached from cocktails and events. Give him a page of Gemara to learn, let him read about medical research that no one has heard about or speak to a junior doctor on new research. He has no time for these things but hard times make it necessary. The money was intended to assist the Jewish people and that’s why he agreed to the event. He wasn’t the one that organized the event.”

Israel’s Channel 20 posted an article encouraging Israelis to donate: “Rav Firer, as is known, belongs to the Charedi community, but his affiliation is not a factor when he examines medical cases and uses his medical connections to assist patients. At those moments, Rav Firer does everything – everything! – in order to save lives. He proved this – for example – when he managed to set up a temporary airport in order to urgently fly a patient abroad for life-saving treatment.”

“Recently, various performers called on the Israeli public to support Rav Firer’s organization, including Ishay Ribo, who only a week ago, posted about a time when Rav Firer assisted him when he needed surgery. Kobi Peretz (a secular singer) wrote that in his view, Rav Firer is the Rambam of this generation.” The article also listed another 12 secular or traditional performers who donated to the fundraising campaign.