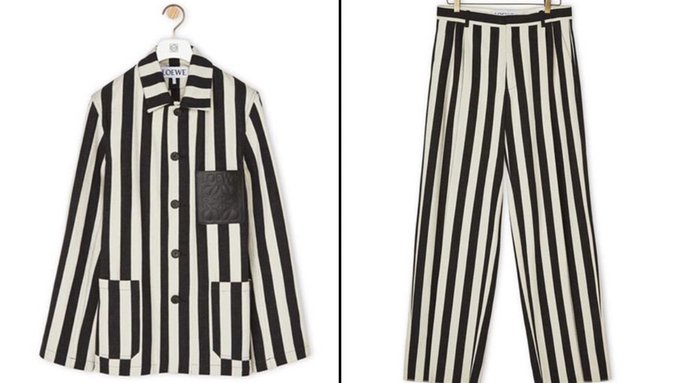 A luxury fashion house in Spain apologized and removed a striped pantsuit that bore an uncanny resemblance to a concentration camp uniform from its website on Friday.

“Unable to see anything but concentration camp uniforms in this $1,840 ensemble…” the fashion industry watchdog account on Instagram, Diet Prada, wrote. “But with the particular stripe proportions and layout, uniform-style garments, and prominent chest patches, there’s not actually much left to the imagination when the resulting look is so uncannily disturbing.”

The Spanish luxury brand, Loewe, issued a statement saying: “It was brought to our attention that one of our looks featured in a magazine and part of our Arts and Crafts ceramicist William De Morgan could be misconstrued as referring to one of the most odious moments in the history of mankind. It was absolutely never our intention and we apologize to anyone who might feel we were insensitive to sacred memories. The products featured have been removed from our commercial offering.”

Unable to see anything but concentration camp uniforms in this $1,840 ensemble from @loewe ‘s William De Morgan capsule, a collection meant to “capture a freedom of imagination”. But with the particular stripe proportions and layout, uniform-style garments, and prominent chest patches, there’s not actually much left to the imagination when the resulting look is so uncannily disturbing. Fast fashion retailers like Urban Outfitters and Zara have had similar products slip through the cracks, which were generally blamed on third-party vendors and swiftly destroyed. Loewe has week-old comments calling this out on post featuring a black and white image from @britishvogue … when will we see a response? • #Loewe #jwanderson #williamdemorgan #loewewilliamdemorgan #britishvogue #capsulecollection #fashion #designer #luxury #luxurybrand #fail #insensitive #holocaust #holocaustmemorial #uniform #prisoner #stripes #stripeshirt #pajamas #history #wwii #loewebag #jwandersonconverse #jwandersonxuniqlo #fashionfail #zara #urbanoutfitters #model #news #dietprada

We are talking a lot about forgetting the lessons of the 1930s. Here's a sick symbolic example of a lack of cultural memory by fashion brand Loewe. https://t.co/ayc9WPqwL4 pic.twitter.com/sHLsMHVqVv

A luxury fashion house has apologized after being criticized for selling an ensemble resembling concentration camp uniforms from the Holocaust. https://t.co/xzqzR7TGFq