The “Medical Aid in Dying” Act allows terminally ill patients to end their own lives via lethal doses of medicine. The new law further provides that should a patient or his family request the deadly poison, the doctor must either prescribe it, or at the least transfer the patient’s medical files to a doctor who would.

Contrary to claims that the bill would allow patients to choose “death with dignity,” the bill is a morally repugnant one, allowing one to take his own life – and forcing doctors to help.

Just a few days before the first patients would have received the lethal medicine, the Superior Court of New Jersey put a temporary ban on the bill as a result of a lawsuit filed by attorney Mr. David Smith on behalf of Dr. Yosef Glassman of Bergenfield, New Jersey. Dr. Glassman argued the bill violates his religious beliefs by forcing him to be complicit in murder. He argued that being required to transfer medical records under the law is “not only a violation of the rights to practice medicine without breaching the fiduciary duties owing to those patients… but also violations of their First Amendment rights under the United States Constitution to freely practice their religion in which human life is sacred and must not be taken.”

However, the victory was short lived when the Appellate Court reinstated the law a few weeks later after an appeal filed by New Jersey Attorney General Gurbir Grewal.

Rabbi Schnall and Dr. Glassman’s lawyer, Mr. Smith, met with Rav Kamenetsky to discuss how to proceed further. The Rosh HaYeshiva gave his full encouragement to keep on fighting the law, mentioning throughout their discussions that the bill sanctions “retzichah”- murder.

In a letter penned to the community, the Rosh HaYeshiva encouraged people to support Mr. Smith and Dr. Glassman in their efforts to block this new law through every means possible. 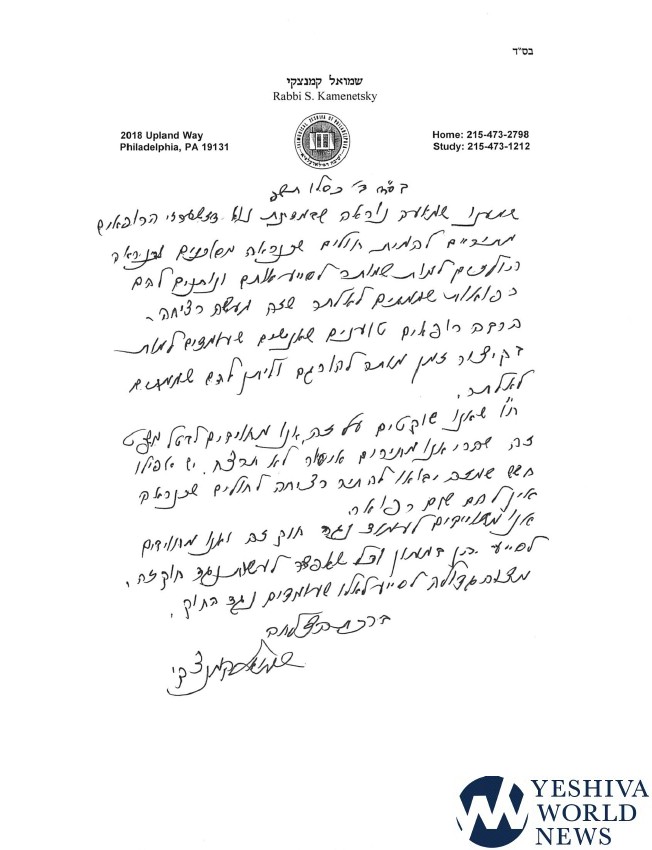