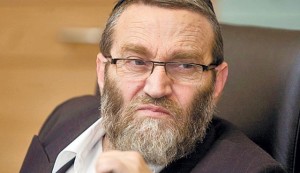 MK (Yahadut Hatorah Moshe Gafne stated the policies of the current government “reminds us of Sodom and Gomorra”, referring to the cuts to yeshivos and monthly child payments to families.

According to Gafne, a former chairman of the Knesset Finance Committee, the cut in monthly child allowance payments that begin this week will “impact hundreds of thousands of families from all walks of Israeli life.”

He calls the new law “cruel and evil”, referring to the government as “evil, one that reminds us of Sodom and Gomorra for under the guise of ideology they it will be bringing children to starvation.”

Gafne stated that he knows for a fact that a number of them are opposed to the policy decision “yet their mouths are full of water and they cannot speak out.” He promises the public will remember and act accordingly.

Opposition leader (Labor) Shelly Yacimovich calls the government decision “malice”, adding “The well-fed government of Netanyahu-Lapid-Bennett it hitting where it hurts once again. A normal average family will lose 2,000 NIS annually because of this decree” concluding “it is an error and malice and represents a total disconnect with ordinary day-to-day life for of human beings.”