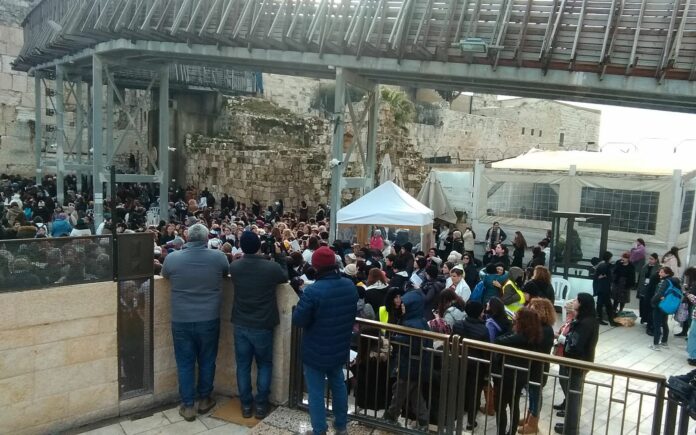 Over a thousand women came to the Kosel early Wednesday morning for Rosh Chodesh Adar davening, filling the entire ezras nashim and forcing the “Women of the Wall” to remain outside the plaza.

Unfortunately, that didn’t stop the Women of the Wall from again treating a Sefer Torah in a non-dignified manner by smuggling it into the Kosel plaza, which is against the law – the second month in a row they have done so.

“No one will prevent us from expressing feminine voices at the Kosel and davening at the makom ha’mikdash,” said Yochi Rappeport, Executive Director of Women of the Wall.

On the positive side, a special guest, the Rav of Tzfat, Rav Shmuel Eliyahu, was present for the joyous singing and dancing in celebration of Rosh Chodesh Adar.

“The masses of people who came today clearly testify to the public’s desire…to preserve the kedushas ha’Kosel…and not allow a handful of violent lawbreakers to harm it,” said Bezalel Zinni, head of the Headquarters for the Preservation of the Kedusha of the Kosel, an organization which arranges for religious people to fill the Kosel every Rosh Chodesh to combat the provocations of the Women of the Wall.

Zinni added that Wednesday’s tefillah marked three years since his organization began arranging the tefillos and he invited Knesset members and others to join in the tefillah but none of them showed up.

“We hope and anticipate that elected public officials…will fight for this issue after the elections and enforce the regulations so the kedushas ha’Kosel will be preserved,” Zinni said.