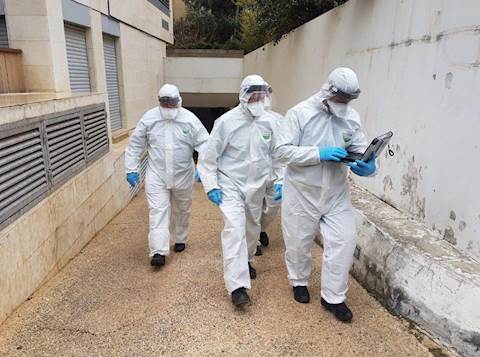 Israel suffered its first fatality from the coronavirus on Friday night when 88-year-old Aryeh Even passed away at Sha’arei Tzedek Hospital. There are 883 people diagnosed with the coronavirus in Israel as of Motzei Shabbos, with 15 people in serious condition.

Three coronavirus patients hospitalized in Wolfson Hospital in Holon took a turn for the worse on Friday, including a 45-year-old man with no underlying health conditions and a 67-year-old woman with underlying health conditions in serious condition and a 91-year-old woman in critical condition. A patient hospitalized in Rambam Hospital in Haifa has also taken a turn for the worse and is now in serious condition.

One of the newly diagnosed patients is a doctor who works in the orthopedic ward of the Poriya Medical Center in Tiverya, forcing the closure of the entire orthopedic department and the quarantine of 38 medical staffers. An investigation has been launched to identify patients who were in contact with the doctor.

The path to the Kosel through Sha’ar Yaffo was blocked to pedestrians on Friday morning in order to avoid crowding in normally dense areas. The government is expected to announce the closure of Shuk Machane Yehudah and Shuk Carmel in Tel Aviv early next week as well.

Pictures of the Kosel taken by a Kikar H’Shabbos photographer on Friday morning show a completely empty Kotel plaza with the exception of three mispallelim.

The emergency regulations which Prime Minister Binyamin Netanyahu announced on Thursday night were unanimously approved by the Knesset overnight Thursday and became legally binding as of Friday morning.

A drive-through testing station opened in Tel Aviv on Friday, enabling Israelis with doctor referrals for testing to be tested for the coronavirus while remaining in their cars.

The testing facility is being run by MDA and if the project is deemed successful, additional drive-through facilities will open in other large cities as well.