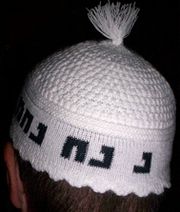 A Breslov chossid was arrested in Kiev Airport after police felt he was acting unruly and creating a ruckus. The chossid had been waiting for hours for his flight back to Eretz Yisrael. His flight on Monday, 5 Tishrei 5774 was delayed.

As a result of the intervention of askanim the chossid was released from custody. The arrest resulted in yet additional delay of that flight, which was delayed seven hours from its original time of departure.

Three hundred irate passengers were waiting for the flight which was to return them home to Eretz Yisrael. It appears that delays are not uncommon, at least since motzei Rosh Hashanah for a number of flights were delayed on Sunday, 4 Tishrei as well. This includes flights heading to the United States, compelled to make a stopover of several hours in Moscow.

On a positive note, most of the Rosh Hashanah travelers from Eretz Yisrael to Uman have already returned home on the dozens of flights that have arrived since motzei yomtov.