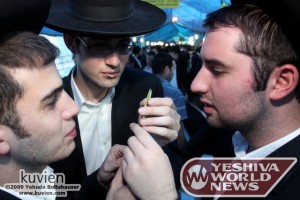 While in past years many lulavim were imported to Eretz Yisrael from Egypt, the experts are reporting this will not be necessary this year as there are 700,000 locally grown lulavim available. Two-thirds of these lulavim come from Jordan Valley/Beit Shean area kibbutzim. In addition, 200,000 lulavim have been exported to the United States.

Most of the lulavim are grown in one of the religious kibbutzim under rabbinical supervision. The largest supplier is Kibbutz Tirat Tzvi in the Beit Shean Valley, which produces 10% of the lulavim in Israel.

In past years, lulavim were imported from Egypt, Jordan and Gaza, and this was associated with an array of issues, including threatened boycotts, security issues and supporting one’s enemies.

Nechemia Refel, the secretary of the Religious Kibbutz Movement is proud that today there is a sufficient number of home grown lulavim, grown by Jews in accordance with halacha as well as sending 200,000 to N. America. Lulavim will sell from 25 NIS to 300 NIS and the yomtov sales are expected to yield 50 million NIS.