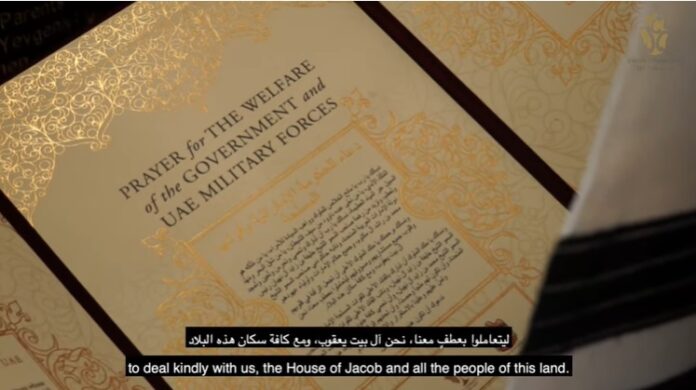 Every Shabbos, the Jewish communities in the United Arab Emirates, in the cities of Abu Dhabi and Dubai, daven for the welfare of the UAE government and armed forces.

The Jewish community, which opened a Twitter account about a month ago, posted a video of the tefillah.

There are small Jewish communities in Dubai and in Abu Dhabi, where the first bris in UAE history was recently held.

A couple of weeks ago, the largest shipment of kosher meat ever delivered to the UAE was sent from the United States to the Jewish community in the Persian Gulf country.

Perhaps on the background of the UAE’s more open relationship with its Jewish community in its midst and with the Jewish state, the United Arab Emirates offered to rescue Israelis stranded in Morocco due to the coronavirus pandemic on one of their planes in April but the plan backfired due to long-standing tension between the UAE and Morocco.

The stranded Jews in Morroco were finally expatriated to Israel about a month later in a secret operation carried out by the Israeli government with the generous help of the philanthropists, Sheldon and Dr. Miriam Adelson, who financed the secret operation and donated the use of their private plane.

Below is a video about the once “secret shul” in Dubai and the relationship between the UAE and the Jewish community and Israel.

A secret synagogue in Dubai was kept secret for years. Here's why it's being revealed now pic.twitter.com/uMi3i2VVDM