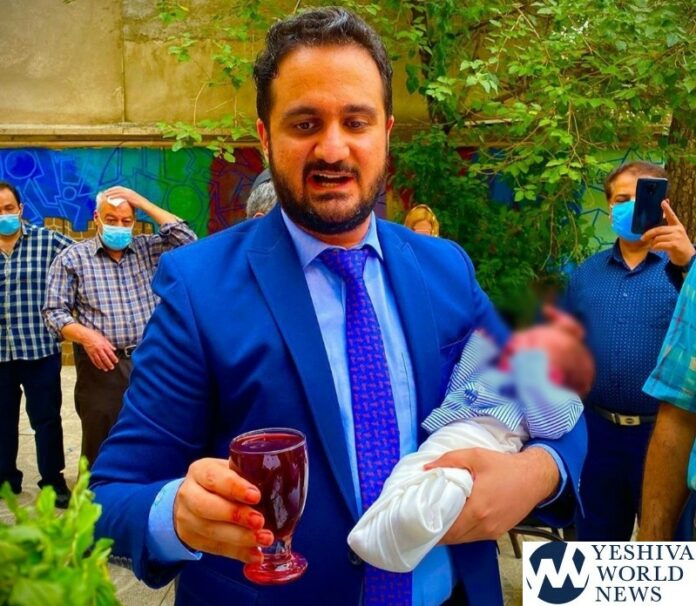 Amid a devastating second wave of the coronavirus in Iran with daily fatalities surging to record numbers, a bris milah was held on Sunday, with Chief Rabbi of Tehran Rav Yehudah Grami serving as the mohel, B’Chadrei Chareidim reported.

The capital city of Tehran has been especially hard-hit by the crisis and the government reimposed restrictions in the city on July 18. The bris was held outdoors and in adherence to social distancing regulations.

In a letter to the Jewish community members, Rav Grami wrote: “All batei midrashos and batei kaneses should be re-closed due to the second wave of the coronavirus and sakanos nefashos.”

“It’s forbidden to daven in a minyan in private homes and/or in any other [enclosed] places and forbidden to hold parties or other events. Whoever is required to say Kaddish should increase limmud Torah and the giving of tzedaka and is patur from saying Kaddish in a minyan.”

Below is a video of a children’s coronavirus ward in Iran:

A report from Iran earlier this month said that over 5,000 health workers have contracted the virus and at least 140 have died.

“Our biggest concerns are the infection and fatigue of medical staff,” Iranian health ministry spokeswoman Sima Sadat Lari said in a briefing on Sunday.

An Iranian official said on Sunday that of Iran’s 31 provinces, 12 are considered “red zones’ and 13 are on “alert” as being close to being designated “red zones.”