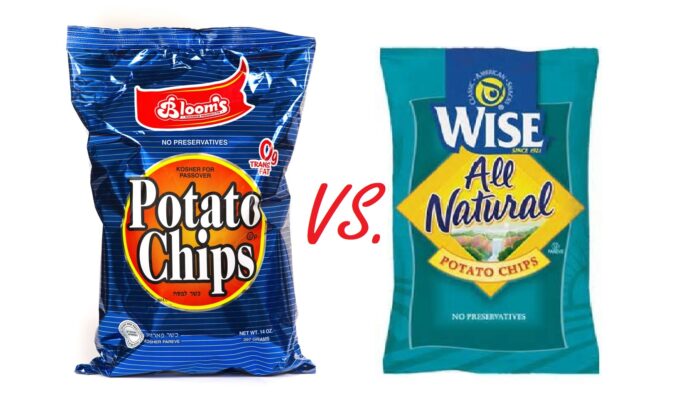 In terms of the specific information you will have by the end of this article, it is anticipated that the experience will be very similar to the actual eating of a bag of potato chips – You will end up with more than you really wanted to have than when you first started.

First off – there is a lot of controversy regarding potato chips – not just halachic but even in the very name.  In America, we call them potato chips – In England and Canada – they are called potato crisps.  This is not just trivia, in England – the word “chips” are what Americans call “fries.”  This has led to some serious halachic misunderstandings by people that are unaware of the linguistical nuances.

And for those who just want the halachic bottom line – Rav Elyashiv zt”l held that regular chips are a problem of Bishul Akum (See Ashrei HaIsh YD 8:1) and so does the BaDatz Yerushalayim.  Those that held and hold it is not a problem are Rav Yisroel Belsky zt”l and yblct”v Rav Dovid Feinstein, the OU and numerous hechsherim.  There are also numerous Poskim hold that is not a problem (cited in Sefer Cham haShemesh p. 102).  There are also a few other factors that can contribute to a lenient ruling.  It should be noted that this discussion only pertains to the issue of Bishul Akum – when there is no hechser there are other Kashrus issues too.  The ingredients and flavorings present serious problems.  Thus, it is forbidden to consume chips without a hechsher on this account.

We will start with the actual process of commercial potato chip making, and then discuss the various halachic issues involved.  The discussion will be limited to regular potato chips – not the Pringles type of chips – which, believe it or not, have undergone some changes since they were first introduced.

Potato chips must be made with very fresh potatoes – less than 24 hours old. If not, then the chips will end up with some ugly-looking bdark spots on them.  Below is the general process involved in the manufacturing of potato chips.  Some interesting tidbits:  The potato chip is generally in the bag within 15 minutes from start to finish. Plants can also also process some six tons of potatoes every hour.

The underlying kashrus question pertains to a concept called, “Bishul Akum.”  Bishul Akum was a rabbinic prohibition introduced by Chazal (the sages) to curb the intermarriage rate.  They did so by establishing the first recorded social distancing steps.  There are three main areas of halacha in which this social distancing applies: a] Bishul Akum, b] Pas Akum and c] Stam Yeinam.  We will discuss the first one in this article – and the exceptions.  Essentially, if food is prepared through a cooking process – it must be prepared by a Jew or it is considered to be non-kosher.  Our concern with potato chips, of course, is step 10 in this process.  May a gentile perform it or must it be done by a Jew?

The general exceptions to Bishul Akum are:

A HISTORY OF POTATOES

Now do potato chips fit into the “exceptions?”  At first glance, it seems that they would simply because they are not fancy.  Unless, of course, just the fact that they may be a potato may knock them out.

Potatoes came to Europe after what is known as the Columbine Exchange – where food from Europe was brought to the new world from the old world and vice versa.  Originally, there was a question as to whether the concept of Oleh al Shulchan malachim applied to potatoes.  The Chochmas Adam 66:4 ruled that Bishul Akum applied to potatoes because potatoes were considered a fancy dish.  The Aruch haShulchan YD 113:18 rules that it did not – as it is [at least in his time] considered poor man’s food.

The Maharsham in his responsum Vol. II #262 differentiates between cooking potatoes and roasting potatoes.  He writes that cooked potatoes are to be considered fancier than roasted potatoes.  However, if you were to pose this question to caterers nowadays – one would elicit the opposite response.   This is probably because the fancy restaurants like to have the char broiled sear marks both on their meats and vegetables.  It is this author’s belief that this became popular at the turn of the Millenium. They are also called “cross hatched grill marks.”  Indeed, restaurants can even purchase chicken with pre-marked with grill marks that they can simply heat up, or microwave and serve. Cooking magazines and cookbooks teach readers how to get great grill marks.  This is also very popular with vegetables and potato wedges. In the days of the Maharsham – it was, in fact, easier to roast.

POSKIM WHO SAY THE CHIP IS NOT SUBJECT TO BISHUL AKUM

Rabbi Yehudah Spitz, of Ohr Same’ach in Yerushalayim, in a seminal article on the topic cites a number of Poskim who are lenient and hold that the potato chip is not considered Oleh al Shulchan Malachim. They are the Debreciner Rav (Be’er Moshe vol. 4:49); Rav Asher Weiss in his Minchas Asher (Devarim 5:8); Rabbi Eliyahu Falk (Machzeh Eliyahu vol. 2:40 and 41) and the author of the Avneh Yashpeh –  Rav Feinhandler’s teshuva in Ohel Yaakov on Hilchos Maachalei Akum (pg. 95 and 634).  Rav Yisroel Belsky zt”l in his Chayei Halevi (vol. 4, 50:10) is stringent regarding French Fries, but lenient regarding potato chips.

Rav Vosner, in his Shaivet Halevi (vol. 2:45; vol. 6:108:4; vol. 9:23; and especially 10:124 rules stringently as does Rav Moshe Sternbuch in his Teshuvos VeHanhagos (vol. 1:438).  Rav Elyashiv is also stringent (cited in Ashrei HaIsh YD 113).  Unfolding what the exact rationale is as to why they forbid it is something that we shall try to clarify.

DO WE SAY LO PLUG OR NOT?

There is one other issue.  What happens if, in general, the type of food under discussion is fancy – but this particular sub-type of that food is not something that would be served at the table of kings?  Do we say that since it is a sub-type of a fancy food – such as meat – that all meat is to be considered fancy even though this is something that would not be served?

Offal meat also known as variety meats, pluck or organ meats, is the internal organs or viscera and entrails of an animal.  Are these considered Oleh al Shulchan Malachim if a gentile had cooked it?

THOSE THAT SAY THAT THERE IS A LO PLUG

Rabbi Yonah ben Reb Yisroel Isserel Ashkenazi, student of the Trumas HaDeshen and the author of the Issur v”Heter rules (Shaar 43:2 cited in YD Siman 113) that these parts are, in fact, subject to the halachos of Bishul Akum.  This is also the opinion of the Pri Chadash who explains that it is because of the idea of Lo Plug.  It is also the conclusion of the Aruch haShulchan.

As far as contemporary Poskim go, Rabbi Yaakov Meir Stern, author of the Imrei Yaakov (p. 107) rules that meat does have a lo plug.  Rav Yaakov Kamenetsky in his Emes L’Yaakov on Tur and Shulchan Aruch (Y.D. 113: footnote 42) states that potato chips do have a Lo Plug.  It is also mentioned in the Darchei Teshuvah 113:9. Rav Moshe Feinstein seems to indicate this way as well YD Vol. IV #48:5.

THE VIEW THAT THERE IS NO LO PLUG

The Shach, however, disagrees with this understanding of the Issur v’Heter.  Generally speaking, to make a lo plug one requires some sort of source in the Talmud.  Also, the Pri Chadash’s explanation is not indicated in the words of the Isser v’Heter.   Thirdly, there is the issue of smaller fish that when salted they are considered oleh al Shulchan malachim, but when they are not salted they are not.  Why is this not a question on the Isser v’eHeter?

THE VIEW THAT HAS DIFFERENT LEVELS FOR MEALS VERSUS SNACK INVITATIONS

Rav Binyomin Cohen, author of the Chelkas Binyomin Siman 113 p. 68 in his Biurim provides a different understanding of the Isser VeHeter.  Initially, he mentioned the Rambam’s opinion about that something can be considered Oleh al Shulchan Malachim if it is a Parperes – an important snack that someone would invite a friend to consume at his home. Rabbi Cohen explains that the Isser VeHeter is stating that even though entrails are not considered fancy enough to serve in a meal – they may be fancy enough for a snack.  The Pri Chadash, however, does not distinguish between different levels of importance regarding a meal versus an important snack.  He, therefore, had to conceive of a concept of Lo Plug.

So how do we look at potato chips?  It is subject to a huge debate among contemporary Poskim.  It is best to purchase the ones that were cooked by Jews, but there is certainly what to rely upon to be lenient.  As an aside, Rav Forscheimer, one of the leading Poskim in Lakewood reports (Shiurei Bishul Akum p. 23) that there may be a debate between Rav Reuvain Feinstein and Rav Dovid Feinstein as to what their father recommended against in Igros Moshe YD Vol. IV #48.  Rav Reuvain understood it as potato chips.  Rav Dovid understood it as French Fries.