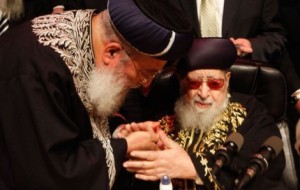 On Sunday, 18 Tishrei 5774 former Rishon L’Tzion Rabbi Shlomo Amar sat in a small sukka on Mitzri Tiran Street in Yerushalayim, not far from his home. Seated around the table were prominent rabbonim from around the country as hundreds of people visited the rav during yomtov, seeking his bracha.

Some people reported that the rav was not himself and those who know him explain it was clear that was the case. Prior to arriving at the sukka Rav Amar visited Hadassah Hospital, spending time at the bed of Maran HaGaon HaRav Chaim Ovadia Yosef Shlita.

It is reported the rav did not manage to cover his growing concern for the gadol hador’s well-being, quoting him as saying “it is difficult to view a Sefer Torah in such pain.”

According to a Maariv report quoting gabbaim of Rav Amar, the visit to the hospital was more than a regular bikur cholim, but in essence, it was the coronation of Rabbi Amar as the successor to Rav Ovadia. The event began on motzei Shabbos when the gadol hador was hospitalized once again after not feeling well during Shabbos.

It should be noted that Rav Amar did not support Rav Yitzchak’s candidacy for the position for he felt that while being a talmid chacham, he lacks experience as a dayan.

Rav Amar’s aides received these messages with a measure of surprise and they feel that the message was clear regarding the successor for the gadol hador – that Rav Amar will be the next Maran to lead the Sephardi tzibur.

Rav Ovadia to see Rav Amar, who arrived on Sunday afternoon, 18 Tishrei. He was reportedly received warmly by Rav Ovadia, who showed his simcha as well as tears. The rav reportedly said to Rav Amar “You are a tzaddik, a light to the world,” words used in regard to the Rashbi, Rav Amar’s gabbaim explain.

Rav Ovadia in the past has on numerous occasions hinted at Rav Amar as his successor, speaking of the rabbi’s “mesirus nefesh” to acquire his level of lomdus and the hardships he endured as a young man to maintain his Avodas Hashem.

Rav Amar and officials in Shas have released messages denying the accuracy of the report. Shas spokesperson Yitzchak Sudri told Israel Radio he is unwilling to have this discussion at a time when the rav is in pain and Am Yisrael should be davening. He added “Baruch Hashem the rav has a number of sons, all being talmidei chachamim, and the matter is not relevant at this time.”

Sudri calls for tefilos and stressed the remainder is not relevant and out of place at this time.