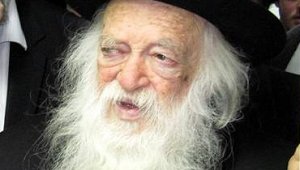 During kriyas HaTorah on Shabbos morning parshas Bereshis 5774 the Sefer Torah in HaGaon HaRav Chaim Kanievsky’s Shlita minyan was found to be pasul. The Torah in question was brought into the shul a number of months ago and it was the first time Bereshis was being read from it.

It is pointed out that while the Torah was used on Simchas Torah to lain Bereshis, the pasul was found in shlishi so it was undetected on Yomtov.

The Sefer Torah was donated during pashas Mishpatim and it has been used for the vosikin minyan since.