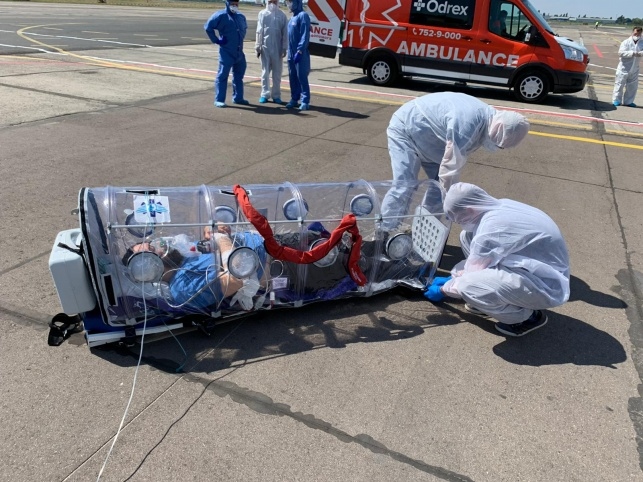 Rav Mendel Cohen, 39, the Chabad Rav of the city of Mariupol in southeastern Ukraine, contracted the coronavirus about a month ago and was hospitalized before Shabbos, Kikar H’Shabbos reported.

On Motzei Shabbos, Rav Cohen arranged to be transferred to a better hospital but unfortunately the medical care in Ukraine, even in the more prestigious hospitals, is extremely poor and his condition deteriorated.

Other Chabad Rabbanim in south Ukraine, Rav Avraham Wolf of Odessa and Rav Shmuel Kaminetsky of Dnipropetrovsk, contacted senior doctors in Israel who told them that if Rav Cohen isn’t immediately transferred to Israel, it may be all over within 24-48 hours.

Rav Shmuel Peles led a rescue operation and flew to Ukraine accompanied by senior doctors from Israel on a private plane filled with medical equipment, and airlifted Rav Cohen in a “bubble” [to protect the staff from the virus] to Israel a few days ago. 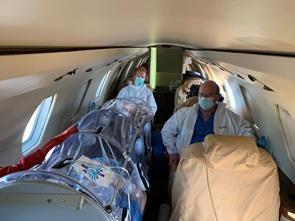 “When Rav Cohen was transferred to the plane, his condition was critical,” a source told Kikar. “It was a matter of hours.”

Rav Cohen’s relatives, friends and shalichei Chabad around the world launched a fundraising campaign for his medical care as well as for the care of coronavirus patients in the Jewish community in Mariupol.

Rav Wolf of Odessa is the cousin and brother-in-law of Rav Benny Wolf, z’l, the former Chabad shaliach in Hanover who was niftar around Pesach from the coronavirus, leaving behind a wife and eight children.

“Rav Wolf saw the same scenario repeating itself in front of his eyes and understood that if he doesn’t take swift and urgent action, it will be too late,” the source said.

Rav Cohen was hospitalized in the ICU of Ichilov Hospital, where baruch Hashem, the doctors have succeeded in stabilizing his condition. He was even able to speak with Kikar, and described a frightening picture of the poor quality of medical care in Ukraine. 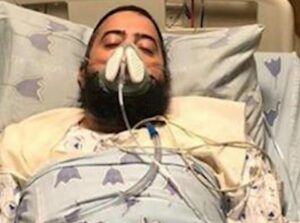 “It’s impossible to adequately describe the danger in Ukraine due to the backward medical care there. I personally received very good treatment and they went out of their way for me because they know me and respect me as the Rav. However, despite their goodwill to help me, the doctors lack equipment and medications.”

“They simply give a list of necessary medications to the patient’s relatives and ask them to obtain them themselves. Despite the fact that I was hospitalized in a very prestigious private medical center, they don’t have an ECMO machine.”

“It’s impossible to describe how dangerous it is there, especially for someone less known than me. A person could be thrown out of his hospital room because a more seriously ill patient needs it or he may simply lie in a hallway or courtyard without receiving any medical care.”

Rav Cohen said that he personally has already buried four Jews from his community and another 45 are in serious or moderate condition due to the coronavirus.

“There are dozens of Jews from my community who contracted the virus but the condition of patients over the age of 40 requires oxygen treatment, etc. In order that Jews won’t die due to lack of medical equipment, I hired a special medical staff and bought oxygen machines and medications for each one of them. Otherwise, some of them would have passed away already.”

Rav Cohen estimates that at least 100 Jews, and possibly up to 150, have died from the coronavirus in Ukraine.