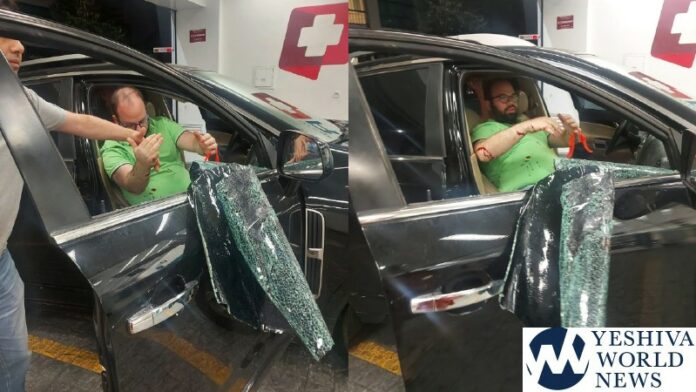 Driving on the streets of Brazil (and many other South American countries) is fraught with danger, especially when at a stop at red lights, due to street thugs who won’t hesitate to use violence or even murder in order to rob drivers.

Moti Rotter, a Chareidi Israeli man now residing in London, is currently in Brazil visiting his wife’s family, B’Chadrei Chareidim reported. As he was driving in São Paulo with his wife on Tuesday afternoon, he stopped at a red light and was accosted by street thugs.

“They smashed the window and tried to steal my phone,” Moti told B’Chadrei. “I fought back and wouldn’t give it to them. The phone fell and they tried to grab it from the floor of the car. All this was happening as the car stood at the red light. When the light turned green I managed to speed away.”

Moti, who is a chef by profession, said that he plans on making a Seduas Hodaah when he returns to London. “It was a big neis, I’m going to make a seduas hodaah. In Brazil, everyone knows not to fight back. The thugs shoot anyone who fights back. But with my Israeli instinct I did fight back but I know it was a mistake. It could have cost me my life. I was very fortunate that they weren’t armed. I managed to flee, bleeding everywhere.”

Moti drove straight to a medical center where he received first aid treatment. He said he’s not afraid to continue driving in Brazil but it’s definitely stressful.

“Similar incidents have already happened to my in-laws and they’re used to it. For me, it was my first time and that’s why I fought back. But it’s important to note to anyone who reads this that it’s forbidden to fight back. Give them whatever they ask for. They won’t hesitate to murder people.”