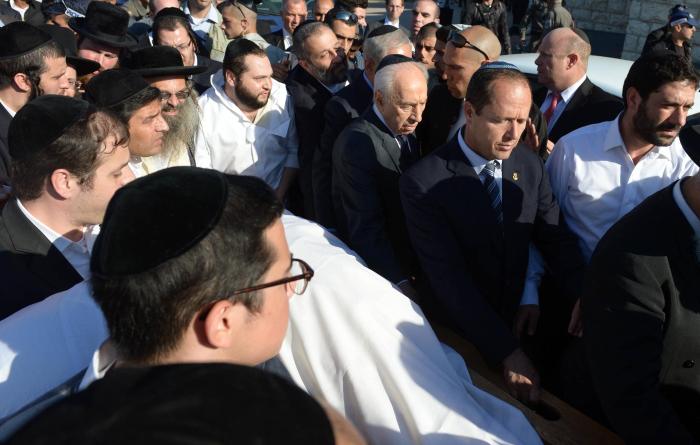 President Peres said, “A few hours ago I went to the hospital to say goodbye to my teacher, my rabbi, my friend Rabbi Ovadia Yosef. It was a difficult time. Tears filled my eyes and my throat was choked with emotion. I held his hand which was still warm and kissed his forehead. When I pressed his hand I felt I was touching history and when I kissed his head it was as though I kissed the very greatness of Israel. Immediately after the fall of the Second Beis HaMikdash there were two greats of the Torah – Yochanan ben Zakai and Yehuda HaNasi. I mention them because they came to the conclusion that for the Jewish people to survive we need to study. Rabbi Yosef symbolized that and acted upon it, he was simply a great man. His greatness wasn’t measured but rather it was felt as a spiritual wind in every corner, lighting up the darkness in unexpected places. When I met him I sensed he was a great man with an unbelievable memory and the wisdom to share his knowledge with others. His contribution was his love for Israel and he solved problems no-one else could solve using his wisdom and spirituality.”