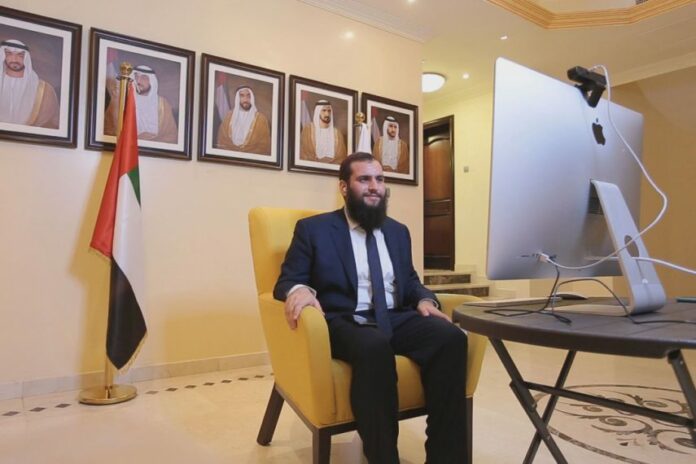 Rabbi Levi Duchman, who has already been active in the United Arab Emirates for six years, was officially appointed as the Chabad shaliach for the UAE on Motzei Shabbos by the Mercaz L’Inyanei Chinuch of Chabad.

“Baruch Hashem, Jewish life here in the UAE has been able to blossom like a desert rose,” Rabbi Duchman said following the announcement, Chabad.org reported. “The coexistence and true respect people have for one another here is beautiful and unfortunately all too unique. It’s also clear that none of this could have happened without the support and vision of the UAE’s benevolent leader, his highness Sheikh Mohammed Bin Zayed Al Nahyan, and is something the entire world can learn from.”

Chabad first became involved with the UAE in 2008, when New York-based businesspeople who had been traveling to the UAE, approached Rabbi Yehuda Krinsky—vice chairman of Merkos L’Inyonei Chinuch, Chabad’s educational arm—and asked him to initiate Jewish outreach among Jews living in the Muslim country. Chabad yeshiva bochurim traveled to Dubai in 2010 and led the Yom Kippur tefillos, the first time that organized tefillos took place in the Emirates. Yeshiva bochurim continued to arrive for every Yom Tov afterward.

Rabbi Duchman first visited the Emirates in the winter of 2015 and returned a few months later to lead a communal Pesach seder in Abu Dhabi. Later that year, he moved permanently to the UAE, and until today he is the only resident Rav in the country.

“At the time, there were a number of Jewish families here already but nothing by way of Jewish education,” Duchman said.

As soon as he settled in, Rabbi Duchman, who speaks five languages including multiple Arabic dialects, [one of which can be heard below in a video] and French, opened a Talmud Torah for the local Jewish children. Only four children were enrolled in the school that first year but today 40 children are enrolled.

In Dubai, the largest and wealthiest city in the UAE, with a population of 3.3 million people, there are now two active shuls. One is led by Ross Kriel and New York-based Rabbi Yehuda Sarna, a graduate of YU and a chaplain at New York University, and the other shul, about 20 kilometers away, is led by Solly Wolf, who serves as president of the shul, and Rabbi Duchman, who serves as the Rav. The shul has a minyan three times a day.

This past Sukkos, Rabbi Duchman arranged the building of the first-ever public sukkah in the UAE in the heart of Dubai in front of the Burj Khalifa, the world’s tallest building, site of the UAE’s first kosher restaurant, which is under Rabbi Duchman’s kashrus supervision.

“There’s a unique bond between Rabbi Duchman and the Jews of the UAE,” Rabbi Kotlarsky said. “Since his initial visit six years ago, we’ve been hearing from residents requesting that Rabbi Duchman remain there.”

As if he doesn’t have enough work as the only resident Rav in the UAE, where he has also been instrumental in making kosher food available, including arranging the country’s first shechita last month, Duchman is also the vice president of the Alliance of Rabbis in Islamic States (ARIS), comprised of Rabbanim serving in Muslim countries such as Turkey, Kyrgyzstan, and Uganda, and has spent time assisting other Jewish communities in the Gulf region.

“The rapid growth of authentic Jewish life and learning in the UAE is truly a herald of the Navi Yeshaya’s words of the era when ‘a nation won’t lift a sword against another nation and won’t train in war anymore,'” Duchman said. “We’re living during very special times.”