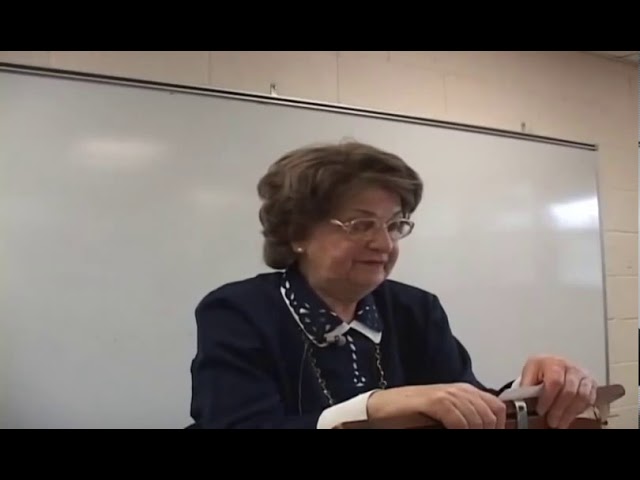 Her name was Chaye Sara Jakobovits, a”h (also known as Sessy) and she had just passed away this past erev Shabbos. She lived in Montreal, Canada.

I first met her some 12 ½ years ago.  She had made it her business to teach as many Bais Yaakov girls about the Holocaust, the Kindertransport, and to make sure that little brothers and sisters knew and understood their obligation to know all about and to retain Yiddishkeit.

Teaching at such a school, it just so happened that I had a video camera and tripod around when she had spoken at one such school. While not requested to do so by anyone, I reasoned that it would also show that other people cared.    After just one moment, it became quite clear that her presentation must be filmed and seen by others.

Her ordeal began on December 1st, 1938. It actually began much before that, but this was the day that ten year old Sessy (now Jakobovits) was separated from her beloved mother. It was also the last day that she would ever see her, as her train slowly departed Berlin toward the groups trek to England.

This was the first train of the Kindertransport, a rescue mission undertaken by British Jewish leaders on November 15th a few days after Kristallnacht. These Jews had approached and pleaded with British Prime Minister Neville Chamberlain to allow into England trainloads of Jewish children up to age sixteen for relocation in England. The first train had some 260 Jewish children, sixty of them from religious homes.

This is how Mrs. Jakobovits (sister-in-law of the late Lord Jakobowitz) aleha hashalom related her story to Bais Yaakov girls across the world, and in particular to one Bais Yaakov this past Erev Shabbos. She described to the girls how each of the frum children had packed their siddurim and had ended up in a camp in England far, far away from any religious Jewish neighborhood or family.

The British taught the young German Jews how to sing English songs. They fed them non-kosher foods on non-kosher dishes. Finally, the children of the group took matters into their own hands. They went into the kitchen and designated some dishes as fleishig, others as milchig and the same with the cups. They decided to form a minyan and began davening, singing zmiros, and even building a Mechitza so that the girls could daven behind them.

They had entered a foreign world, a strange world of adults who werenot of their religious background. But these young boys and girls, though grateful for what these adult strangers had done for them, could not let the dreams and aspirations of what their parents hadwanted for them die. They could not and would not allow the birthright of Sinai, the traditions of thousands of years, to be snuffed out by Hitler’s Nazis nor by the British desire for their rapid assimilation.

Mrs. Jakobovits lived through it all. She saw how older brothers had vouchsafed and secured the religious Jewish identity of their younger brothers and sisters. She and her brothers have descendents that number over five hundred, ken yirbu. All of them Torah observant. The Bais Yaakov girls were captivated. They cried with her. They experienced her hakaras hatov and joy with her.

Mrs. Sessy Jakobovits a”h was an amazing woman. Clearly, it is an emotionally draining experience for her each time she recalled her tragic ordeal. Yet, she felt that it was her duty so that what Klal Yisroel endured will not be forgotten.. so that the memory of the Kedoshim will endure. And so she she would speak. If she was not invited, she invited herself. Because the message was so important.

Sessie grew up in Leipzig, Germany. Her father was the local doctor. She vividly recalled how a Jew who tried to save the Sifrei Torah in the Shul on Kristallnacht had received two gashes across his head and how her father had stitched him back to life.

Her father, used to take the Roshei Yeshiva who came from afar, around fund-raising to the local populace. One of these Roshei Yeshiva would later remember her father’s Mesiras Nefesh for Torah and took in Sessie’s brother.

Toward the end of the war, she and her brothers receive a letter. A letter from her mother. Sessie believed that the letter belongs to Klal Yisroel. It is a letter from a mother asking that they Always be straight and honest and follow the Torah. It is a letter that could have been written by the hundreds and hundreds of thousands of Jewish mothers that perished in the cauldrons of Nazi Germany.

Her story is a story that must be told and heard. It is worthwhile to have it shown in our shuls, and Bais Yaakovs.