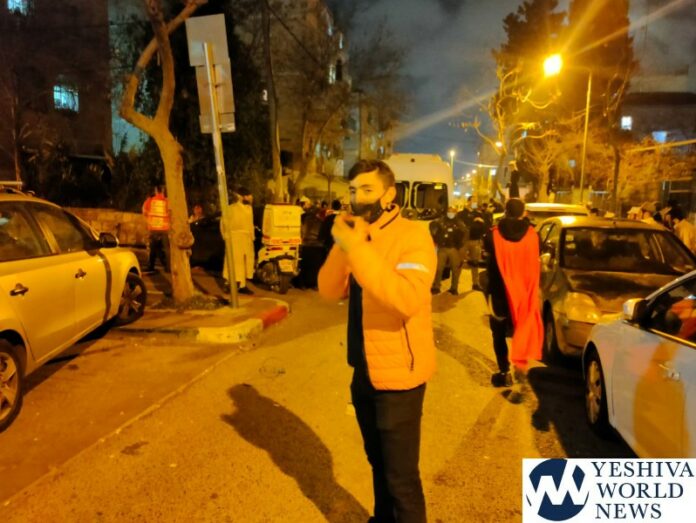 The driver who fatally rammed his minibus into an unruly crowd of drunken fringe youth who were attacking him on the corner of Shivtei Yisrael in Jerusalem, killing a Chareidi man, was identified on Monday as Ibrahim Hamed, a resident of east Jerusalem.

Hamed, who was hospitalized following the incident, which killed Itamar Ben Abu, z’l, 47, of Mevaseret Tzion, was released from the hospital on Monday morning and brought to Jerusalem’s Magistrate’s Court, where his detention was extended by three days. He is suspected of reckless manslaughter.

Hamed told police that he had no intention of running over anyone and he was just trying to flee the scene and save his life as the youth were punching and kicking him after surrounding his minibus, yelling “Arab, Arab.” Photos of Hamed in court reveal deep scratches on his face.

“They attacked me from all directions,” he said. “It was a lynch. I didn’t mean to ram anyone. I was trying to save my life and I fled. I was the one who called the police in order to turn myself in. I was on the way to work to drive Jewish workers and I was caught in this situation. They saw I was an Arab and they attacked me.”

“On the videos, you can see the criminals trying to enter his car and my client’s body has signs of violence,” said Hamed’s lawyer, who slammed the judge’s decision to extend his client’s detention. “The rioters broke into his car while my client was still in his car – before the ramming.”

“Do you intend to arrest the criminals who lynched him?” Hamed’s lawyer asked the judge. “Instead of bringing the suspects to court, we’re here to extend the detainment of the victim – a man who arrives at his place of work and is lynched – they almost killed him. The police arrested only the victim. The true suspects are those criminals and they weren’t arrested. If they were Arabs, the police would have closed down the city until they arrested them.”

Ironically, in 2014, Hamed’s father was badly injured in a terrorist attack but was arrested by the police when they arrived at the scene because they mistakenly thought he was the terrorist. He later died of his wounds in the hospital.