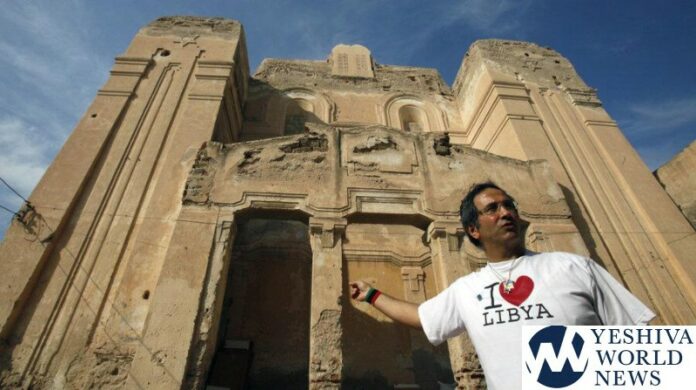 Libyan authorities have quietly made a decision to convert the ancient shul in the Old City of Tripoli into a modern library, according to a report by Kan News, which obtained footage of the damage in the shul.

In response to an inquiry, Libyan officials told Kan that the damage was caused by maintenance work to renovate the building but did confirm that there was an attempt to erect a building next to the shul that could have damaged the shul but the work was halted.

Dr. David Gerbi, a representative of an international organization for Jews of Libyan origin, told Kan that he still fears the authorities will convert the shul into a library, destroying an integral part of the history of Libyan Jewry, which dates back 2,300 years. The Great Synagogue of Tripoli is one of the only shuls in the country with the potential to be rebuilt as other shuls have been destroyed or have been converted for other purposes, including as mosques.

The community of Jews with Libyan roots is seeking the support of Libyan Prime Minister Abdul Hamid Mohammed Dbeibeh, the UNESCO, UN envoy to Libya Ján Kubiš, the US Ambassador to Libya and the Italian Embassy in Libya to protect all the ancient Jewish buildings in Tripoli, including the shul.

Dr. Gerbi, a psychologist by profession and a resident of Rome, was expelled from Libya at the age of 12 on the orders of then-leader Muammar Gaddafi following the Six-Day War. He is one of the few Libyan Jews who has returned to the unstable country for visits, on four occasions. His first visit in 2002 was the first time a Jew visited the country since they were expelled in 1969. Currently, however, Libya is too dangerous for Jews to visit.

In 2009, Gerbi met Gaddafi in Rome and requested his assistance in preserving the Great Synagogue but his efforts were in vain. “I thought that Gaddafi really had good intentions but it was all a lie,” he said at the time.

After the fall of Gaddafi in 2011, Gerbi traveled to Libya and went to the site of The Great Synagogue of Tripoli accompanied by journalists and reporters from around the world. He broke the wall behind the door leading to the crumbling shul using a five-kilo hammer. The shul had not been used in the dozens of years since Gaddafi had taken power.

Unfortunately, Gerbi’s hopes have not yet come to fruition. Libya has been in a state of chaos and civil war since the fall of Gaddafi. The capital in western Libya is controlled by government forces supported by Turkey and Qatar and the east of the country is controlled by Egyptian, Emirati, and Russian forces. Recently a national unity government was established to put an end to the divisions. Time will tell if the efforts for peace and unity will be successful.