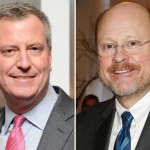 In recent months, Borough Park and Flatbush has gotten used to having New York City mayoral candidates coming to campaign. Now that it had narrowed down to two candidates who are relatively close to the Jewish community, the community is being courted like never before.

While the Republican candidate Joe Lhota has been more visible in his aggressive outreach to the community, Mr. de Blasio has kept his meetings with leaders of the Orthodox Jewish community out of the public eye, keeping his cards close to his chest.

Mr. de Blasio is scheduled to meet with Jewish community leaders at the home of Mr. Abe Biderman, a former supporter of Bill Thompson, this coming Saturday night, YWN has learned.

“For Lhota, Jews gradually became focus of campaign,” Hamodia highlighted Mr. Lhota’s outreach to the community in a lengthy profile of the Republican candidate. “A quick scan of Lhota’s daily emailed schedule for last week alone shows stops in two Jewish centers on Staten Island, a Bukharian Jewish group in Queens, the Young Israel of Far Rockaway, a powerful appearance on Nachum Segal’s radio show, a breakfast for the Bronx Jewish Community Relations Council, a Boro Park JCC breakfast, and a meeting with the Flatbush JCC. It is clear that Lhota has staked his path to victory through Staten Island, along with Boro Park, Crown Heights and Forest Hills.”

In his meetings with Jewish groups, Hamodia notes, Lhota comes across as a person who is eager to learn and to understand new concepts. He easily admitted that he couldn’t pronounce the term metzitzah b’peh, an issue of concern that was brought up several times throughout the day.

“The bris ritual which I cannot pronounce,” he begins during one of the gatherings. “Every time I try, I mess it up.”

“We don’t want you to pronounce it, we want you to denounce it!” one participant yells out.

Mr. Lhota also addressed his status as a practicing Chatholic but legally Jewish. Surprisingly, Mr. Lhota has not made an issue of his own status as a Jew, which would possibly attract him to the city’s Jews even as he faces an opponent who represented parts of Boro Park in the City Council for eight years.

“I consider that pandering,” he told Hamodia. Adding, he was also hesitant politically, wondering how the Jewish community would accept him. “I’m not going to come into the community and start talking about how my grandmother is Jewish,” he said. “It begs the question: well, why aren’t you? And I wasn’t raised Jewish.”

Meanwhile, Other than attending smoked filled rooms with community leaders, making sure the press and Jewisj media are not aware of his meetings, Mr. de Blasio is a no show in the community he once represented in City Council. 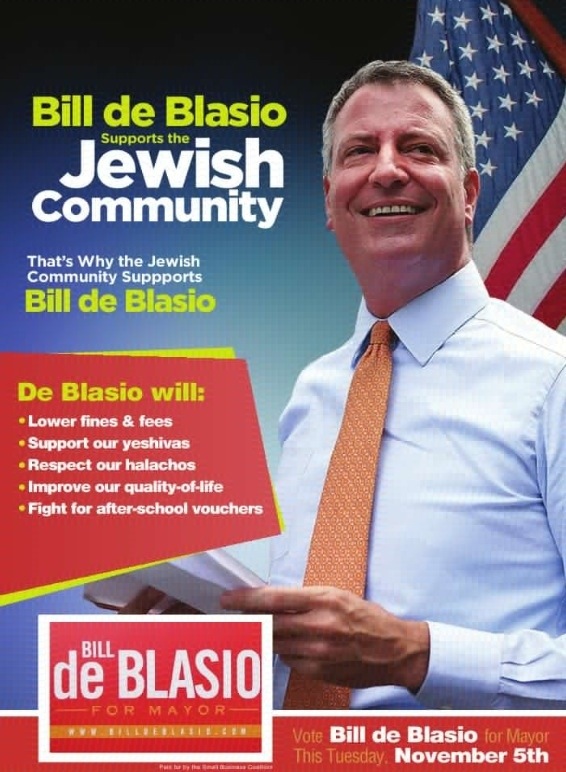 However, the uncertainty of Mr. de Blasio’s positions on key issues is causing some anxiety within the organized Jewish social service network at a time when some programs for the needy have already been frozen because of a state probe of misappropriated funds at the Metropolitan Council on Jewish Poverty, The Jewish week reports.

One Jewish organizational leader, who spoke on condition of anonymity, told The Jewish Week that he was hopeful an alternative to scrapping member items — that Bill de Blasio now opposes — could be found that also addressed the corruption concerns. “There are a number of ways one could retool the system,” said the official.

“You could have a pot of money for aging and youth services go through the Council or go through city agencies with Council input. This could have more accountability and I would hope we could engage with the new mayor, whoever that may be, to discuss how to make sure his money is best spent and avoid the political and financial pitfalls we have seen in a very small number of contracts,” he said.

“De Blasio’s campaign did not respond to several requests for an interview. The campaign also did not respond to prior inquiries about his view on a pending matter of religion and law: The Human Rights Commission’s efforts to rein in Orthodox shops in Williamsburg who post modesty rules for customers,” Adam Dickter notes in the article.

Nonetheless, Mr. de Blasio still maintains a close relationship with the machers and leaders in the community. “De Blasio will be fair and square in issues affecting the Jewish community, like Sabbath observance,” former state Sen. Seymour Lachman, who served alongside de Blasio in a district that overlapped with his Council district, told The Jewish Week.

In 7 days, with the polls showing him with a 40 point lead over Mr. Lhota, Mr. de Blasio is expected to receive a substantial higher amount of support in the community than previous Democratic candidates running in general elections.