Yitzchak Herzog, who was elected as Israel’s 11th president on Wednesday, has many close ties with Rabbanim and Gedolim and was the favored candidate of the Chareidi MKs for this reason.

HaRav Yosef Yitzchak, Israel’s Chief Rabbi, spoke with Herzog on Wednesday and congratulated him on his win, saying: “It’s a great honor for Israel that the elected president is continuing the dynasty of his grandfather, the Chief Rabbi of Israel,” Kikar H’Shabbat reported. 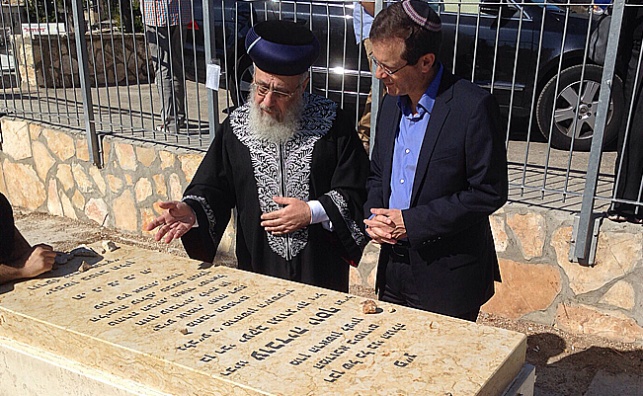 Herzog’s father, Chaim Herzog, served as Israel’s Ambassador to the United Nations and gained fame in 1975 when he tore up the “Zionism is Racism” resolution passed by the UN in front of the assembly and said the words that became famous: “For us, the Jewish people, this resolution based on hatred, falsehood and arrogance, is devoid of any moral or legal value. For us, the Jewish people, this is no more than a piece of paper and we shall treat it as such.”

Chaim Herzog was following in the footsteps of his father, HaRav Yitzchak HaLevi, who 36 years earlier tore up the White Paper that the British put out in 1939, restricting Jewish immigration to Israel. HaRav Yitzchak HaLevi, led a procession through the streets of Jerusalem and announced on the steps of the Churva shul: “We cannot agree to the White Paper. Just as the prophets did before me, I hereby rip it in two.”

In the video below, Herzog speaks [in English] about his father, his grandfather, and the Simchas Torah he spent with the Lubavitcher Rebbe.