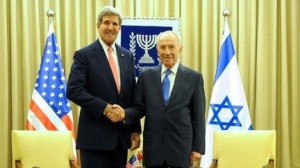 President Peres and Secretary Kerry delivered statements to the press.

President Peres welcomed Secretary Kerry and said, “Mr. Secretary, dear friend. First of all I want really to express our deepest appreciation and respect for your unmatched energy and devotion in the face of such a complex situation. You can lead, urge and provide compromises but all of us, Arabs, Jews, Palestinians, Israelis; we don’t have a better alternative. The cost of making peace goes up daily and we don’t have as much time as people think. I believe that we have an agreement about how to conclude the negotiations but I know it’s not simple. I know the complications. The Palestinians leaders, including President Abbas, know there is no real alternative for them as there is no real alternative for us, that will bring peace. The alternative is to renew conflict, to renew hate but there is no alternative to peace other than the two state solution.

“Our greatest danger is Iran, our greatest hope is peace. I think the policy the United States has laid down is acceptable; to try to achieve an end to the Iranian attempt to build nuclear bombs preferably economically and politically but the Iranians should know that the alternatives are even more expensive for them. If there is a change then it started because of the sanctions and we should not stop them.” President Peres added, “I want to thank you and President Obama for your unmatched devotion in the face of all the difficulties. We shall do whatever we can to support you, to support your mission. I want to thank you for what you did, for what you are doing and to ask you not to postpone for a moment.”

Secretary Kerry thanked President Peres for his welcome and said, “Last night I had the privilege, when I arrived to be taken to that infamous site which you know too well, where you were the night that Prime Minister Yitzhak Rabin was assassinated. I know that the two of you had just finished singing a song together, “Don’t whisper a prayer, sing a song of peace in a loud voice.” It was very moving, Dalia Rabin was there and I was very touched that members of the family came. Most importantly I was inspired because that was 18 years ago, he dared to fight for peace then and the least we can do, any of us, in following his example and inspiration, is to continue and find the goal here.”

Secretary Kerry addressed the peace talks and said, “I’m convinced from my conversations with Prime Minister Netanyahu as well as with President Abbas that this is not mission impossible, this can happen. It will require both leaders to make big, historic, difficult decisions but I’m also convinced those are decisions that are absolutely, totally in the interests of their country Israel and their country to be, Palestine and in the interest of both people’s. As you said moments ago, there is no alternative; there will be chaos, violence, turmoil, confrontation in the absence of peace. You cannot live with perpetual war. President Obama has asked me to put this time into this effort, he is deeply committed to this cause and we believe that over the next months, with good effort, we hopefully can make some progress.”

Kerry addressed the Iranian nuclear situation and said, “On Iran our eyes are wide open. We appreciate your comments and we certainly appreciate your support for exhausting the possibilities of diplomacy and our hope is that Iran will understand that this is a simple obligation. Show the world that you are pursuing a peaceful program; it’s not that hard, lots of other nations do it. We will remember our friends and their interests and we will be very thoughtful and careful when we proceed. I’m very grateful to you again for your support for our diplomatic effort.”