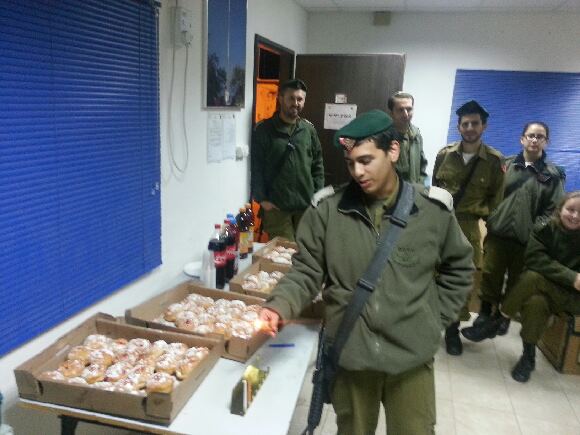 The Kuchar family were not always  serving pizza to IDF soldiers.  They started their first site in the mid-nineties, well before most people understood what the Internet, and more specifically the World Wide Web, was capable of doing.

Their early sites were related to “selling” Israel to the world: They introduced Israeli artisans and musicians to a potential market they never dreamt of reaching; They represented producers of Judaica and jewelry; and also sold “mishloah manoth” for delivery to families in Israel. While they were not the first to offer Purim gifts sent to Israel, however they were the first to run this service exclusively via a website.

After a couple of years, they added a “send a mishloah manoth to an Israeli soldier” option, allowing people to give serving Israeli soldiers the opportunity to celebrate Purim along with Jews here in Israel and around the world. “It is only because they are out there instead of at home, that we here in Israel can celebrate”, was their slogan.

2002 saw a lot of interest in the Mishloah Manoth project. People were asking what else they could do to show their support of the soldiers and boost their morale, more than just once a year on Purim. Initially they had some thoughts about pizza or other food gifts. But we were not sure how this would work out.

Then, a month later, came the attack on the Park Hotel. On the first night of Pesah in 2002, two hundred and fifty, mostly elderly people, amongst them many Holocaust survivors, gathered at Netanya’s Park Hotel to celebrate seder. That evening, an Arab disguised as a woman, entered the hotel carrying a suitcase of powerful explosives. He detonated it in the dining room, instantly killing twenty-eight civilians and injuring another about 140, twenty severely; two of those succumbed to their injuries.

This brought the Israeli Defense Forces into action, triggering Operation Protective Shield. The army entered into many Arab areas and cities. Israel was receiving much support from her friends. Of course the rest of the world showed little interest, just expressed criticism — what were a few exploded Jews lives? The supporters however found no tangible way to expressing their gratitude and support at a grass roots level.

With the start of the army’s operation, Menachem Kuchar knew that he could help. And so PizzaIDF was born. He set up a website within a matter of hours. The immediate response was overwhelming and gratifying. Over the next couple of weeks while the military operation proceeded, we received requests for thousands of pizza pies to be sent to the troops on behalf of people from all around the world. He  delivered to as many locations as he could, to active duty combat soldiers, regular and reserves, largely serving around Judea and Samaria, and also in Gaza. The troops were pleased both to receive the pies, and equally importantly, to know that people around the world were thinking of them and supporting their struggle. Though it is hard to know for sure, he estimates that at least 30% of the contributors were not Jewish. Most people took the opportunity we provided to send personal messages to the soldiers with their pizza. We glued their letters onto the pizza boxes. In many cases this built a new bond between individual soldiers and units with supporters worldwide. School children ran special projects to raise money, many drawing pictures or writing decorated messages, which he distributed with the pizza.

The Kuchar’s service has continued unabated since. They have added other items to their menu, often related to the Jewish festival calendar: jelly donuts for Hanukkah, honey cake for Rosh haShana, and of course Mishloah Manoth for Purim.

Everything they send is 100% kosher, and they make sure not to send pizza during the daytime when the army serves meat meals, nor burgers in the evening when meals are dairy. 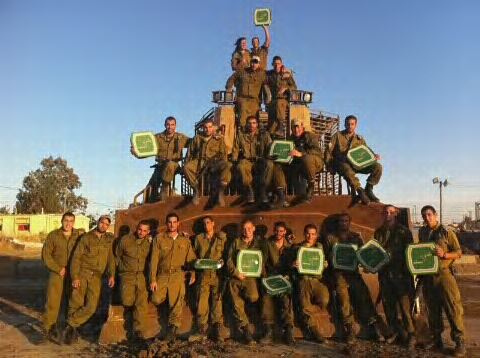 He is pleased that his son Elisha has taken over managing this project. As the commander of an artillery unit, he is better able to locate and distribute  pizza and other gifts equitably amongst the serving troops.

It is hard to describe how happy the boys and girls are to receive these special treats — it goes well beyond getting a hot pizza late at night to a lonely post. And it is as tremendous an experience for the team at PizzaIDF to give them out as it is for the soldiers to receive them. They love to know that people everywhere support and care for them – and so do we.

PizzaIDF.org invites  all to joinfor the fun and yummy donuts project. Just click on PizzaIDF.org buy some donuts and tell your friends about this amazing opportunity.