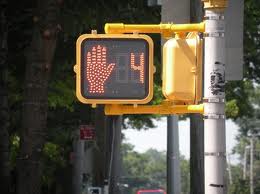 Councilman David G. Greenfield is inviting all community members to suggest locations where the next round of pedestrian countdown signals should be installed at dangerous intersections around Boro Park, Midwood and Bensonhurst. The city previously installed countdown clocks at Councilman Greenfield’s request to improve pedestrian safety at busy intersections throughout the district, including along Ocean Parkway and Fort Hamilton Parkway. Additional countdown signals will now be installed by the Department of Transportation (DOT) after residents voted for them earlier this year as part of the participatory budgeting initiative. With that in mind, Councilman Greenfield is now asking residents to suggest intersections where they would like the new round of countdown signals installed to make crossing easier and safer for everyone, especially children, seniors and the disabled.

“Now that the public has voted to install more countdown clocks, I want to hear from the residents who walk around our neighborhoods and know exactly which streets and intersections are most in need of safety upgrades. The whole idea of participatory budgeting is to let residents make decisions about what their community most needs. That’s why I am inviting everyone to contact me with the locations they would like to see these important and life-saving pedestrian countdown signals installed,” said Councilman Greenfield.

Immediately after taking office in 2010, Councilman Greenfield began working with the DOT on a plan to install pedestrian countdown signals at some of the area’s most dangerous intersections, including all of the major Ocean Parkway crossings in the district. The signals feature an LED countdown of the number of seconds a pedestrian has to cross the street and help improve safety by informing the pedestrian when the light will change and by helping pedestrians avoid getting stuck on narrow medians mid-crossing in the middle of traffic.

Based on the popularity of the countdown clocks that were installed along Ocean Parkway and elsewhere several years ago, residents voted this past spring during participatory budgeting to allocate funding for approximately 10 more signals each in Boro Park, Midwood and Bensonhurst. In response, Councilman Greenfield has set aside $606,000 in the city budget to fund this initiative. With the DOT now preparing to move forward with that project, and in the spirit of participatory budgeting, which lets the public decide exactly how $1 million is reinvested locally, Councilman Greenfield wants to hear from residents regarding which intersections they think the signals are most needed.

Councilman Greenfield has made improving the safety of local streets a main focus since taking office. He works closely with the DOT on the installation of traffic signals and calming measures around the district, especially in response to concerns from the public.

“While we have made great progress over the past few years to improve the safety of our neighborhood streets, recent tragedies are a reminder that much work remains. We all play a part in helping to make our roads safer, so I urge the public to contact me with their suggested locations for these countdown signals,” said Councilman Greenfield.

To suggest a location for the placement of the countdown clocks planned for intersections around Boro Park, Midwood and Bensonhurst, contact Councilman Greenfield by phone at (718) 853-2704, by e-mail at [email protected] or via Twitter at @NYCGreenfield. Councilman Greenfield will pass along the most suggested streets to the Department of Transportation.