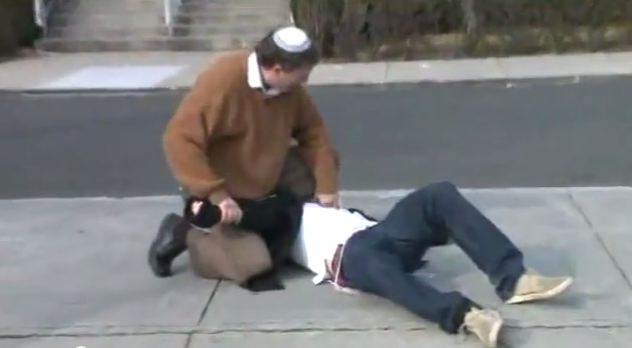 [The Following article is VIA pix11.com]

Rabbi Gary Moskowitz is a black belt, a former NYPD cop and a Jewish man.

He demonstrates how his community should be protecting itself, by anticipating an attack before it even happens.

In two months, a number of members of the Jewish community have become targets.

What appears to be a random attack and known as the so called “knockout” game, has focused on either the elderly or Jewish people.

The latest victim, a young Orthodox Jewish man, asked PIX11 not to identify him out of fear of backlash..

Over the phone he told PIX11 he was distracted around 10 p.m. Sunday night, talking on his cell phone in the area of Bedford Avenue and Taylor Street in Brooklyn, when suddenly he was hit, struck right in the forehead so hard he says he blacked out briefly.

All he remembered seeing next was two people running away. This time however no camera caught the attack.

Moskowitz sympathizes but says this “game” targeting innocent civilians is nothing new.

“When I was police officer in the early 80s and early 90s, I can tell you this has been going on for a generation already,” Moskowitz said.

What is different today, however, is many of the attacks and the attackers are caught on camera.

A useful tool in catching some of the thugs, but Moskowitz says his phone has been ringing off the hook with people saying they want to be proactive.

Simple defense tactics are all he says anyone needs to make sure they don’t become yet another victim.

“I want to send a message clearly to these thugs, to these kids who are causing these difficulties to stop their way, turn your life around, but if not — if you swing at me, you’re going to be hit back.”