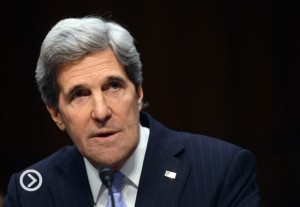 Secretary of State John Kerry will present his best case to Congress against plowing ahead with new economic sanctions on Iran that could break a historic nuclear agreement and estrange America’s closest allies in Europe as well as China and Russia.

He’s appearing Tuesday before the House Foreign Affairs Committee. This, as lawmakers threaten to undermine last month’s interim nuclear accord in Geneva. There, the U.S. and world powers promised Iran $7 billion in sanctions relief in exchange for nuclear concessions.

The deal prohibits the Obama administration from introducing new sanctions for six months. Kerry and other U.S. officials have warned of dire consequences if Washington breaks its word. And Iran’s foreign minister has said any new package of commercial restrictions would break the deal.