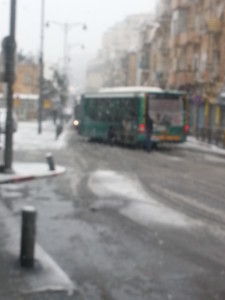 While forecasters did not expect the snow to begin falling until later Thursday, 9 Teves 5774, Hashem appears to have had other plans and large dry flakes began accumulating in Yerushalayim early in the day, shortly after 7:00 AM.

Education Ministry officials had announced earlier that schools in the capital would remain open today but that was changed not too long after as it was clear schools in Yerushalayim would not operate. Schools in Gush Etzion are closed too, as is Hebrew University. Other school closures include portions of the Haifa area as well as southern Israel.

In the center of Yerushalayim the situation deteriorated rather quickly as drivers of Egged accordion buses realized their vehicles are not suited for the snow. One bus partially jackknifed on Aggripas Street directly opposite Machane Yehuda, effectively closing the street in both directions.

A long line of buses [and some private vehicles] could be seen in both directions on Aggripas Street, a major city center artery for buses.

While for residents of areas of Europe and N. America is may appear humorous to see school and street closures as a result of a minute amount of snow, one must realize the city is not equipped with the means to deal with quantities of snow accumulations as compared to major N. American cities. The same holds true for vehicle tires and perhaps no less import, drivers. Unfortunately, too many drivers were not educated regarding driving in the snow and the need to significantly increase the distance between cars and the fact that a vehicle will require a great deal more stopping time.

YWN-ISRAEL will continue updating readers on the reader during the course of the day.

In Gush Etzion, bus service is being delayed for two hours. A final decision regarding school opening in that region will be made by that time.

09:14:
The Chief Rabbinate of Israel announces test for the Rabbanut being held in the Jerusalem Convention Center will take place as planned. Arrangements will be made for persons unable to make it due to the inclement weather.

09:35 IL:
Traffic police advise motorists heading to the capital to find an alternate route to the Jerusalem-Tel Aviv Highway (Highway 1) which is blocked due to the snow accumulations.

Route 395 between Sataf and Ein Kerem is closed due to snow accumulations.

09:48:
Snow accumulations are expected to pick up during the afternoon hours as temperatures continue to drop. The snow is expected to continue through the night. Shabbos’ forecast is a cold one.

10:01 IL:
Officials announced all buses between cities leaving from the Jerusalem Central Bus Station have been halted. Local bus service strives to continue in the capital as the snow continues accumulating. Light rail service is operational at this time. The Jerusalem-Tel Aviv Highway towards the capital is closed kilometers before the capital.

10:27 IL:
• Highway 1 closed from Latrun to the capital. Closures in the Tel Aviv direction as well.
• Light rail service interruptions in the capital.
• Bus service in Yerushalayim halting as snow accumulating rapidly.
• Road closures throughout Yehuda and Shomron, particularly in the S. Hebron Hills, Binyamin Council and Gush Etzion.

10:31 IL:
16 “critical bus lines” continue operating in Yerushalayim at this time. Most bus service to inner neighborhoods halted. One may check with Egged, the 106 city operator or the Jerusalem Municipality website.

11:03:
The Jerusalem-Tel Aviv Highway to Tel Aviv is closed from the capital to the Harel Interchange.

11:20 IL:
Efforts to maintain bus service on major roadways in the capital were unsuccessful and Egged reports that despite salt trucks and plows, all bus service in and to the capital has been halted until further notice.

Channel 2 News weather reports that while no snowfall is expected on Shabbos, the storm is expected to continue during the day today, through the night and on Friday. The snowfall is not going to be constant, but sporadic.

Accumulations in areas of Yerushalayim are reportedly between 10-15 centimeters (3.9 – 5.9 inches) at this time.

12:46 IL:
The storm and accompanying high waves resulted in damage to the Rambam Medical Center heliport, located next to the water adjacent to the IDF naval base. All chopper flights heading to the northern regional trauma center are being redirected to the city’s airport until the heliport can be repaired.

13:12 IL:
Both Routes 443 and 1, the Jerusalem Modi’in and Jerusalem –Tel Aviv Highways are open once again after plows succeeded in opening the major vehicular routes. Police and Jerusalem sanitation officials have come under fire for “the lack of preparedness” as public transported was halted and major roadways were shut by the snow.

Officials responding explain the snow was only expected to begin on Thursday afternoon but in reality, it began accumulating on Thursday morning shortly after 7:00 AM.