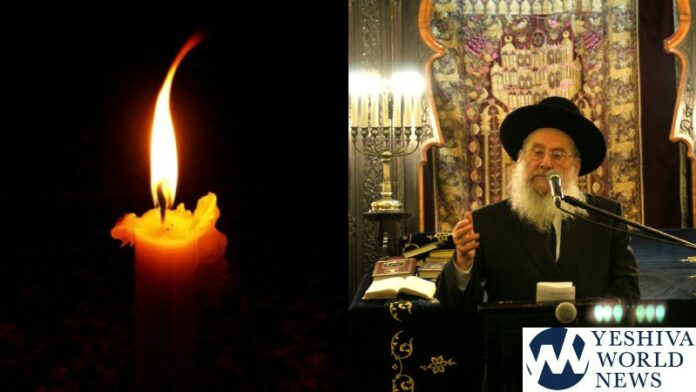 Frum kehillos in Europe and throughout the world on Wednesday evening were engulfed in mourning after hearing the bitter news of the petirah of HaGaon HaChassid HaRav Dovid Moshe Lieberman, z’tl, a leading Rav in Europe and the Rav and Av Beis Din of Shomrei HaDas in Antwerp, at the age of 96.

HaRav Leiberman, who was hospitalized several weeks ago after breaking his hip, requested to return home on Wednesday. Later in the day, he asked his daughter for his hat and davened Mincha and Maariv. He then requested a cup of water, recited Shehakol and was niftar.

HaRav Lieberman was born in the city of Cologne in Germany, to Rav Yitzchak Isaac and Sara Hinda Lieberman. When he was one year old, his parents moved to Antwerp, where he later learned at Talmud Torah Yesodei HaTorah. He gained a reputation as an illui at a young age and while still a young boy, he was already learning b’chavrusah with Antwerp Rav HaGaon HaRav Mordechai Rottenberg, zt’l, who foresaw his talmid’s brilliant future.

His skills in limmud led to him to Yeshivas Eitz Chaim in the city of Heide, Belgium, headed by the Rosh Yeshivah, HaGaon HaRav Shraga Feivel Shapira, z’tl.  When HaRav Leiberman was 11, HaGaon HaRav Yechezkel Abramsky, z’tl, delivered a shiur in the yeshivah and later said: “I don’t know if everyone understood my shiur but there’s a 11-year old bochur that definitely understood.”

When World War II broke out, Rav Lieberman’s father was in the UK, where he survived the war. Rav Lieberman, a young teenager at the time, fled with his mother and three younger siblings to France. His siblings were rescued and sent to the US but he and his mother were sent to a concentration camp in France, and shortly later his mother was deported to Auschwitz, where she perished.

Six months later, Rav Lieberman managed to escape to his uncle, who was still living in France, later joining the yeshivah of HaGaon HaRav Shneur Zalman Schneersohn, z’tl, in Marseilles which also served as an orphanage, where he survived the war and grew close to Chabad.

After the war, Rav Lieberman moved to the US, where he learned under HaGaon HaRav Aharon Kotler, z’tl, in Lakewood and in Yeshiva Tomchei Temimim of Lubavitch. He married in the US and received semicha from HaGaon HaRav Moshe Feinstein,zt’l and HaGaon HaRav Yisrael Zev Gustman, z’tl.

In 1949, he moved to Chicago, where he served as a Rav and mechanech until 1967, when he moved to Detroit to serve as a principal in Yeshivah Beis Yehduah. In 1981, he moved back to Antwerp and assumed the position of the Rav and Av Beis Din of Shomrei Hadas, becoming one of the leading Rabbanim in Europe and founding “Mercaz Rabbanei Europe.”

HaRav Leiberman is survived by many illustrious children, grandchildren, and great-grandchildren. His sons, sons-in-law and grandchildren serve as Rabbanim and shlichei Chabad in Ashkelon, London, France, Ukraine, Melbourne, and Brazil. His grandson, Rav Mendy Chitrik, serves as a Rav and Chabad shaliach in Istanbul and is the chairman of the Alliance of Rabbis in Islamic States. 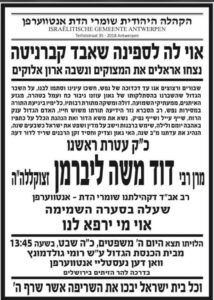 My dear grandfather the Chief Rabbi of Antwerp, Rav David Moshe Lieberman, has passed away. 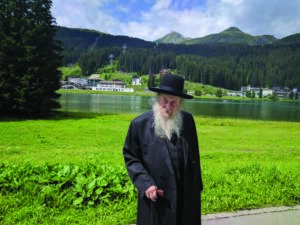