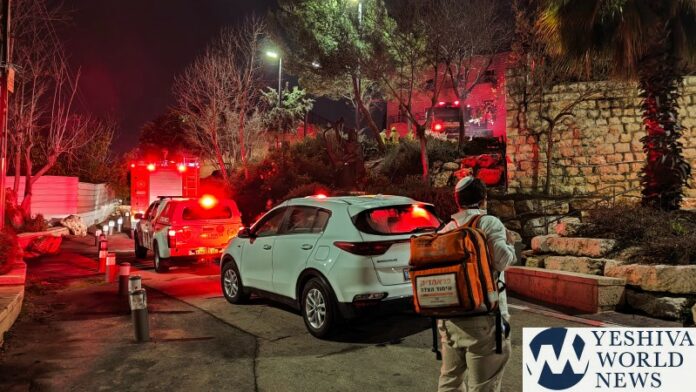 First responders from United Hatzalah, Magen David Adom, the Fire Department, and the Police department responded to a fire in an apartment building on Har Tzion Street that claimed the life of one woman. The incident took place on Motzei Shabbos and according to a statement by the police, the entirety of the apartment was destroyed.

The woman who was niftar was in her mid-80s according to statements made by medical personnel at the scene, and she had suffered severe burns on many parts of her body. As firefighters battled the blaze and extricated the woman, police evacuated the residents from the rest of the building, including several people who were trapped. The police spokesperson stated that three officers were injured due to smoke inhalation as a result of their activities at the fire.

United Hatzalah stated that a total of five people were treated at the scene for light injuries as a result of smoke inhalation.

In Ma’aleh Adumim, also on Motzei Shabbos, nine people were injured in a fire that broke out in the basement of an apartment building on Avnei Choshen Street. Firefighters worked to put out the flames and evacuate a number of people from the building.