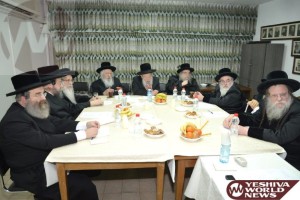 It appears that following the session of the Moetzas Gedolei Yisrael of Agudas Yisrael on Monday, 13 Teves 5774 leading admorim shlita are off to spread the message around the world.

Meeting separately in Bnei Brak was the Moetzas Gedolei Hatorah of Degel Yisrael, joined by over 100 prominent litvish rabbonim and roshei yeshiva shlita. The two bodies of gedolim shlita released a message “the government does not have the right to compel lomdei Torah to serve in the IDF”.

The admorim affiliated with Agudas Yisrael decided to travel around the world to spread their message as the Shaked Committee if finalizing its version of the draft law, which is scheduled to soon be voted upon in Knesset. The admorim will explain the dire situation of the chareidi tzibur in Eretz Yisrael, the result of the policies of the current administration. This includes cuts in funding for yeshivos and the planned draft of chareidim into the IDF and national service programs.

The admorim made an appeal to government leaders to back down before it is too late, using the morning chareidi newspapers and electronic media to spread their message. It is expected that a number of the admorim will be traveling to the United States and Europe.

The combined message of the litvish and chassidish rabbonim shlita is