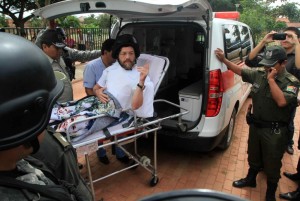 Bolivia’s government says it considers American businessman Jacob Ostreicher a fugitive after unknown groups helped him flee across the border into Peru.

Justice Minister Cecilia Allyon said in a press conference Tuesday she doesn’t know whether the U.S. government played a role in Ostreicher’s escape. She said Bolivia is alerting Interpol.

“He is someone being processed for common crimes and has no immunity,” Ayllon told reporters. “This affords us greater clearance in requesting his extradition.”

Ostreicher has yet to appear in public since arriving in the U.S. Family members initially feared he had been kidnapped.

Ostreicher spent 18 months in a Bolivian jail without charges on suspicion of money laundering while trying to salvage a rice-growing venture. He was released a year ago and put under house arrest after actor Sean Penn asked President Evo Morales to free him.