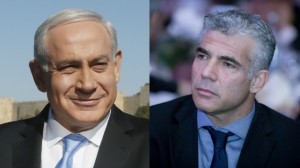 According to “senior coalition officials” quoted anonymously in the daily Maariv, Prime Minister Binyamin Netanyahu is looking for the way to dump Yesh Atid and its leader, Finance Minister Yair Lapid, to replace the ultra-secular party with the chareidim, Shas and Yahadut Hatorah. The mainstream media reports that tensions are evident as the prime minister is not accustomed to the harsh mannerisms of his finance minister, Yesh Atid leader Yair Lapid. Lapid is not reserved when it comes to showing and flexing his coalition might and defying the prime minister.

Maariv in its Thursday, 16 Teves 5774 edition quotes coalition officials saying “the coalition is simply not functioning. Mr. Netanyahu has two options, to bring in Labor headed by Yitzchak Herzog or the chareidim”. They continue explaining that Labor is not too likely to agree to enter into a coalition with the right-wing Bayit Yehudi party, while for the chareidim it is not a non-starter. For newly-elected Labor party leader Yitzchak Herzog, entering into a coalition with Bayit Yehudi is not an option for he remains a strong supporter of ongoing negotiations between Israel and the PA (Palestinian Authority).

While one can never know when it comes to the chareidi parties, Shas officials are signaling it is highly unlikely they will enter the coalition, reminding us how Maran HaGaon HaRav Ovadia Yosef ZT”L lamented over his last meeting with the prime minister and how the late posek hador cried over ongoing efforts to draft bnei yeshivos.

The Ashkenazi chareidim, Yahadut Hatorah are signaling that they too cannot envision such a situation as they continue referring to the Netanyahu-led administration as being responsible for the “gezeiros shmad”.