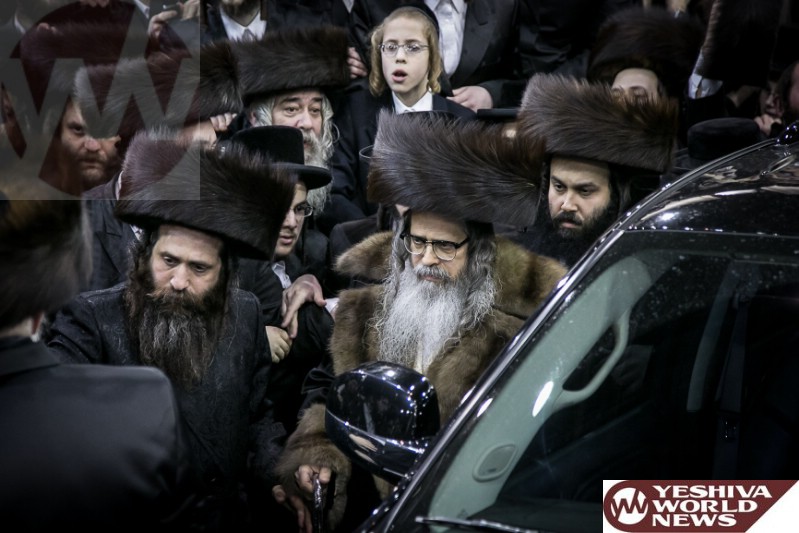 It was a full house at the Satmar dinner in Kiryas Yoel to pay tribute to its mosdos. The event was held on motzei Shabbos Parshas Shemos 5774 in the hall of the talmid torah. During the event several announcements were made, including the news that the new girl’s school is almost complete and that a new chasenah hall and mikve are going to be constructed.

The Rebbe Rav Zalman Leib Shlita spoke out harshly against WhatsApp groups, citing the foul language and utter nonsense that is transmitted from one to another while senders and recipients wait in anticipation. He warned that being a member of such a group results in one’s “regesh Yehudi” being wiped out. The rebbe added that using such a program is synonymous with וילכו אחר ההבל ויהבלו.

After addressing the prohibited technology the rebbe began to discuss the planned draft of bnei yeshivos in Israel. He quoted the Rebbe Vayoel Moshe ZT”L ZY”A, who stated the day would come when a chareidi Jew will not be able to live in Israel. “At that time it appeared he words were an exaggeration, especially over the years in which chareidi political parties were part of the government and served as ministers.”

The rebbe added that even those chareidim who sat in the governments over the years are now in agreement and refer to the current administration as “shmad”. The rebbe feels that if the “compromise” of Nachal Chareidi was not reached a decade ago, today, “the government would not dare” to attempt to draft bnei yeshivos, comparing the situation to Pharaoh and his tactics of בפה רך to entrap the Jews into slavery, citing how they first received payment for their labors and eventually they were enslaved. “This is the way of the wicked in Eretz HaKodesh, first pulling the chareidim into the government, paying money to yeshivos and kollelim, and now, they plan to take the chareidi youths into the military which represents the biggest betrayal in Malchus Shomayim there is”.

The rebbe feels the government will be tenacious in enforcing the new law and he fears for the bnei Torah community regarding the future in Eretz Yisrael, pointing out some bnei Torah were already jailed for non compliance regarding induction orders. The rebbe adds one must be moser nefesh in this case and there is no other alternative.

The rebbe then spoke of a planned trip to the United States by leaders in Eretz Yisrael, referring to admorim affiliated with the Moetzas Gedolei Yisrael of Agudas Yisrael. He feels there can be great benefit to such an initiative, adding לך כנוס את כל היהודים to permit the admorim to explain the dangers and the need for mesirus nefesh. He feels a gathering of thousands will lend strength to the battle and signal a sign of leadership, adding it might be time to call for chareidim around the world to take to the streets against the draft effort.

The rebbe however points out a contradiction, questioning how the admorim can protest against a government in front of the non-Jews when they themselves are part of the system. He questions how they can be part of protests in front of the goyim when they are part of the process. The rebbe asks why a goy would feel a chareidi should have different responsibilities than a non-frum citizen regarding military service when they are in Knesset, receive government funding for mosdos and benefit from state assistance. “This is in essence what the government is asking of the chareidim, to accept an equal share of the burden.”

The “erliche Yidden” adds the rebbe, those who do not accept any government funding can protest and the non-Jews get it since they are not looking to the government to support them. Their position is understood but how can one expect the non-Jewish community to understand the plight of the chareidim who sit in Knesset and accept state funding?

“The time has come for cheshbon nefesh regarding acceptance of government funding for this is the cause of all the gezeiros” added the rebbe. “This is what leads to the hate of religion and the demands to change the curriculum and so forth” he added.

The rebbe then relayed that a senior official from Chinuch Atzmai in Eretz Yisrael recently visited him, and that person explained how difficult things are becoming by the day. The shaliach explained to the rebbe that some schools have already buckled under pressure and accepted changes in their curriculum, changes that would lead to talmidim serving in the IDF for they would no longer see anything wrong with such a move.

The rebbe asked why Chinuch Atzmai doesn’t refuse state funding and fund mosdos by reaching out to the wealthy chareidim around the world instead of being tied to the budgets received from the state. The rebbe explained the money does exist and it is possible. The official admitted it is doable, albeit difficult.

The rebbe concluded that things being what they are, and in light of the fact such choshuva admorim will be making this trip, the tzibur is compelled to step forward and do what it can to assist in this hour of need.

Iowa’s Grassley To Skip GOP Convention Due To Virus Concerns