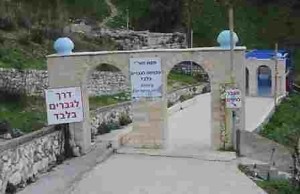 It did not take too long for Tzfas Chief Sephardi Rabbi Shmuel Eliyahu to respond to a Facebook campaign decrying a gender separation sign in the Tzfas Beis Hachaim. YWN-ISRAEL reported someone who was offended by the sign posted it on the “Secular Tzfas” Facebook page, a secularist platform used to rally support against chareidim in the holy city.

Channel 2 reported that the secular activists sent letters to the mayor of the city and other elected officials, voicing their disapproval of the gender separation. Senior officials in City Hall addressed the matter, sending a letter to the city’s religious council. Officials in the religious council explained the city’s chief rabbi is responsible, turning the information to Rabbi Eliyahu. The rav ordered the signs calling for gender separation removed.

Rabbi Eliyahu explained that the sign was set into place for the yahrzeit of the Ari HaKodosh in Menachem Av, when it was known many women would be present too. The signs were supposed to have been removed following that event but it appears some still remain in place. The rav now ordered all of the signs removed.