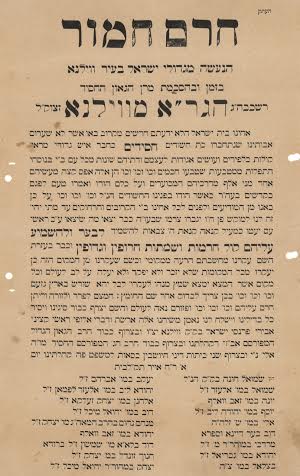 If you are a collector, this deal may present a unique opportunity. The item for sale is the oldest known pashkavil for a rabbinical cherem, in this case against the chassidim.

The pashkavil announced the Vilna Gaon’s cherem against chassidim and it will be offered for sale at a public event. It is dated to the end of the 19th century by an expert who verified its authenticity.

Maron Eren, who manages the Kedem Auction House, explains there are litvish and chassidish collectors interested in acquiring the pashkavil.

In the 1750s there was a new movement in the air of the Jewish community as chassidus was introduced. The new movement was not accepted by the Eastern European rabbinical leadership leading to a cherem by the Vilna Gaon. His following included both batei din of Vilna so the cherem was a powerful one, known as “Cherem HaGra”.

It is believed that the pashkavil that is being sold is the only copy from that period, dated about 70-100 years after the first Cherem HaGra.