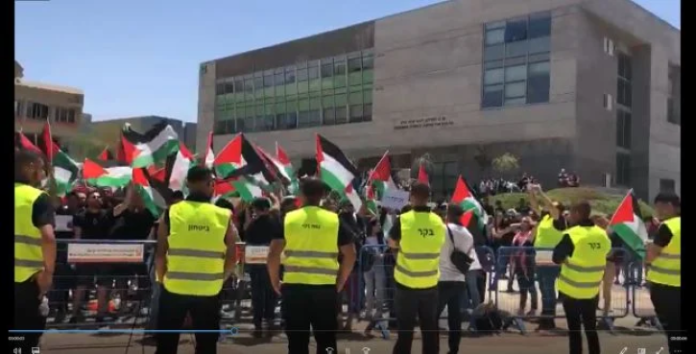 Arab students waved PLO flags and sang anti-Israel songs at Ben-Gurion University in Be’er Sheva on Monday at a pro-Palestinian demonstration approved by the administration.

Jewish students waving Israeli flags held a counter-demonstration nearby and dozens of security guards secured the area to ensure no violence would break out. One of the university’s security guards was seen waving a PLO flag along with the students!

Following the incident, Beer Sheva Mayor Ruvik Danilovich sent a scathing letter to the president of the university, Prof. Daniel Haimovich. “I received a shocking video from the campus of Ben-Gurion University of the Negev, here in the State of Israel, and I could not remain indifferent,” he wrote. “Palestinian flags are being waved proudly amid songs of praise for Israel’s enemies, whose sole desire is to eliminate it.”

“Ben-Gurion University of the Negev is part of the city of Be’er Sheva and the State of Israel. It cannot convey weakness. My heart goes out to our dear bereaved families who lost their loved ones and are watching this disgrace. Where are the days when the university banned political activities and definitely a blatant and defiant protest against the State of Israel? Another red line was crossed today. I must tell you, I am ashamed.”

The university’s response was that “the university is a meeting point where it’s possible to become familiar with people with new ideas and different world views. Therefore, we allowed two political rallies with opposing views.”

“The images we saw this morning from Ben-Gurion University in Be’er Sheva are unfathomable,” Education Minister Yifat Shasha-Biton said. “Incidents such as these will be examined in the evaluation we carry out with the Higher Education Council regarding students involved in incitement, violence or harm to state symbols.”