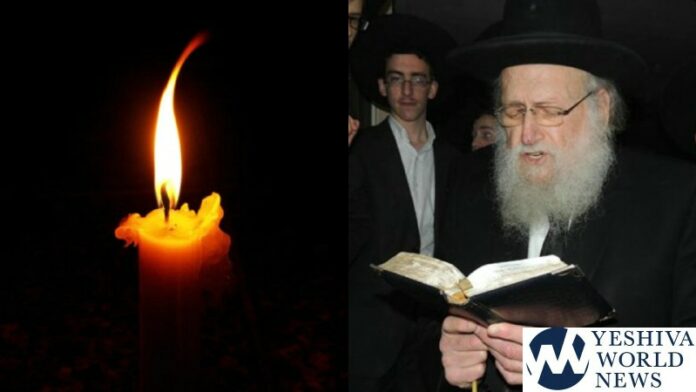 The Rav of Rechovot, HaGaon HaRav Simcha Hakohen Kook, z’tl was niftar on Tuesday at the age of 92.

HaRav Kook, z’tl was the Nasi of the Maor HaTalmud Yeshivah and the Rav of the Churva shul in the Old City of Jerusalem.

HaRav Kook grew up in Tiveria, where his father served as the city’s Rav and learned as a bochur in Yeshivas Chevron. After his marriage, he served as the head of Yeshivas Merom M’Tzion, later Kiryat Noar, in Bayit Vegan in Jerusalem., where he worked with boys in need of chizzuk. Later he taught at Yeshivas Bnei Akiva in Netanya where he formed a close relationship to the Ba’al Shefa Chaim of Sanz, z’tl.

After his father’s death, HaRav Kook was appointed as the Rav of Tiveria. But several months later, a family tragedy occurred when his older brother, HaGaon HaRav Shlomo HaKohen Kook, z’tl, who served as the Rav of Rechovot, was killed in a terrible car accident, along with his wife and two of their children. HaRav Kook was called to serve as the Rav of Rechovot in his brother’s place. Shortly later, he established a yeshivah in memory of his brother at the recommendation of HaGaon HaRav Shach, z’tl – Maor HaTalmud, where over 500 bochurim learn today.

HaRav Kook would travel several times a year abroad to fundraise for the yeshiva and considered maintaining the yeshivah as the most important mission of his life.

As the Rav of the city, HaRav Kook’s home was open to all. Even the members of the left-wing parties of the Rechovot municipality frequented his home and were guests on Shabbos.

HaRav Kook fought for Shabbos in Rechovot, and for years would leave his home shortly before Shabbos to gently remind business owners to close their stores for Shabbos. He also organized “protests” – Shabbos tefillos outdoors. “We’re not protesting against,” he would say. “We’re protesting FOR, for Shabbos, for Torah, for Hakadosh Baruch Hu.”