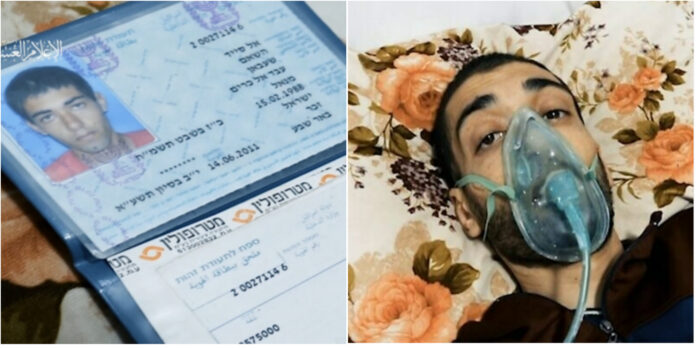 The Hamas terror group on Tuesday evening released a video of a man they claim is Israeli captive Hisham al-Sayed hooked up to an oxygen mask.

The publication of the video follows its announcement on Monday evening that there had been a “deterioration in the health of one of the enemy prisoners.”

The video shows al-Sayed lying on a bed with an oxygen mask on his face and hooked up to an IV drip. An image of his Israeli teudat zehut is seen at the end of the video.

The video also features a TV in the background with Al-Jazeera broadcasting last week’s Qatar Economic Forum – an attempt to prove that the video is a recent one.

Al-Sayed is an Israeli-Bedouin who suffers from a mental illness. He voluntarily crossed into Gaza in 2015 and was taken captive by Hamas.

Hamas referred to Al-Sayed as a soldier. Prime Minister Naftali Bennett excoriated Hamas for the publication of the video and clarified that Al-Sayed is not a soldier.

“Publishing a video of a sick person is despicable and an act of desperation,” Bennett said. “Hisham al-Sayed is not a soldier but a mentally ill Israeli citizen who crossed the border into the Gaza Strip several times previously.”

Foreign Minister Yair Lapid also slammed Hamas, stating: “Israel considers Hamas directly responsible for the plight of its citizens it is holding in violation of international law. These are two mentally ill people and holding them captive for years is an act of inconceivable cruelty. Hamas also holds the bodies of two IDF soldiers, the late Hadar Goldin and Oron Shaul, while trampling on all boundaries of morality and international law.”

“I call on the international community, including the World Health Organization, the International Committee of the Red Cross, and organizations for the mentally ill, to condemn Hamas for its inhuman behavior and demand that it act in accordance with international law and release the civilians and bodies it holds.”

“The State of Israel will continue to make every effort to bring back the IDF soldiers and Israeli citizens who are being held captive by Hamas.”

Below is a video of Al-Sayed’s father telling Kan News that he’s happy to see his son after all these years, and contrary to what the video wants to portray, he says that he thinks his son appears to be in good condition.