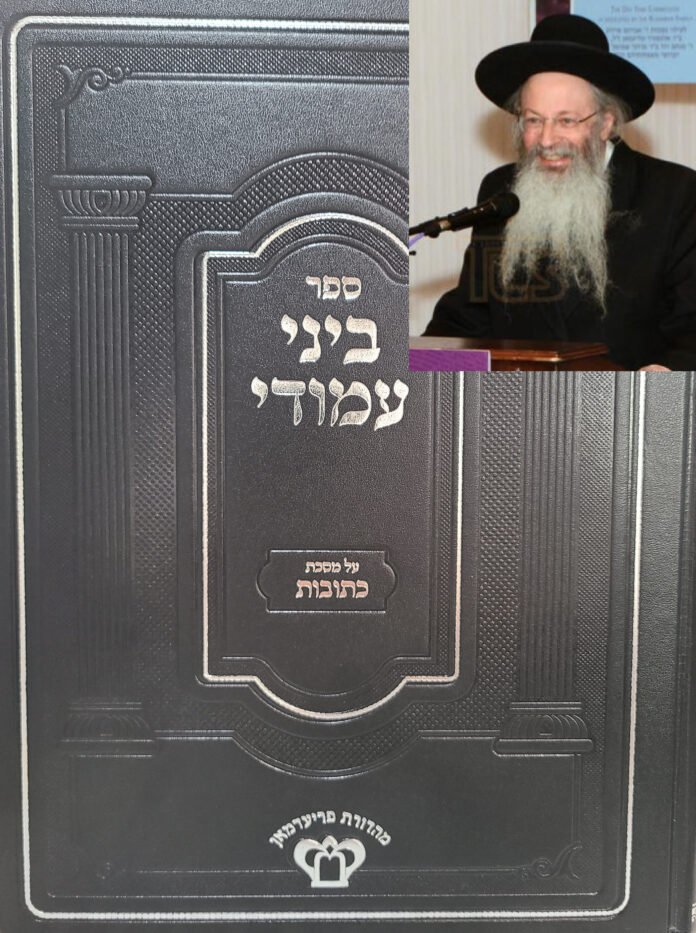 Rav Malkiel Kotler shlita, the eldest grandson of Rav Aharon Kotler ztl from Rav Shneur zt”l, has written a remarkable sefer with forty one simanim of the Rosh HaYeshiva’s shiurim on tractate Kesuvos.  The 355 page sefer is entitled, “Bainei Amudei – between the pillars”  referencing the famous Talmudic passage where in Rabbi Ami and Rabbi Asi only davened between the pillars of where they would study – notwithstanding the fact that they had twelve shuls in Tveriya, where they lived.  The sefer is reflective of Rav Malkiel shlita’s complete devotion to Torah study, which is immersed completely within the walls of the Beis Midrash of BMG.

Kesuvos is a fascinating mesechta as there are so many fundamental concepts in Talmudic methodology that are contained in it.  Who among those who have not studied in a  yeshiva would think that the topics of the three cardinal avairos, the laws of Shabbos klallim, adopting and converting a and the laws of choshain mishpat would be found in this mesechta?   In Rav Shmuel Deutsch’s michtav bracha on the sefer, he notes that “this sefer is different than other seforim – in that it does not try to attempt any [fancy] external luster, but rather he follows the path of clarifying fundamentals in all of their principles and details.”  Rav Deutsch (who heads the Otzer HaChochma project) further laments the fact that in this generation, we are sorely lacking in the learning method of cheshbon (working everything out according to each view and each sub-topic).  He points out that a sefer such as this is literally life-saving – anyone studying it will see how exactly to approach a sugya.

The Sefer is a must-buy for any serious Yeshiva student or Torah scholar – Non-BMG student, or BMG student, pre-freezer or post-freezer, earning or learning.

Siman 2 of the sefer employs a chakira of Rav Chaim Soloveitchik (on Rambam Yesodei HaTorah 5:1 – the first piece) to ultimately answer a question that Rav Akiva Eiger (in his gilyon on Yuma 82b) had on Tosfos. [This piece, it seems was originally printed in a journal called Ohel Ramah on Sanhedrin in 2008)

Generally speaking, the Torah tells us “veChai Bahem – and you shall live by the Torah.”  Our sages teach (See Yuma 85b and Sanhedrin 74a) – to live by and not die by them – all except for the three cardinal sins.  When faced with these three sins – we must never violate them, even if our life is at stake.

The Gemorah in Sanhedrin tells us that we must let ourselves be killed rather than violate these three sins. Idolatry’s exception is derived from the Shma: And you shall love Hashem your G-d with all your soul – bechol nafshecha.

Arayos is derived from a Hekesh to the taking of life – (the hyper-text like connection which applies the laws of one topic to another – Dvarim 22:26). Just as one is allowed to kill a would-be murderer chasing someone – so too may one kill a would-be rapist chasing someone.  Since this halacha is true, the exception to “and you shall live by them” is also true.

And where is the exception of “taking of life” derived from? – It is a compelling logical rationale, concludes the Gemorah in Sanhedrin:  Who can say that your blood is any redder than his [the victim’s]?  The Gemorah quotes Rava who gave this answer to someone who asked him about how his local temporal administrator, Marei Durai, told him to kill others or he will kill him.

The Gemorah in Sanhedrin mentions another caveat – that when the matter is in public – one must also give up one’s life for one of the non-cardinal sins on account of the idea of Chillul Hashem.  The Gemorah brings up its original prima facie understanding of the case of Esther as a question on this caveat – declaring that it too should be considered a public matter.  One answer that the Gemorah gives is that of “Karka Olam” – that Esther was only violating this sin passively.

The Baalei Tosfos in Sanhedrin (74b “Veha”) ask that Esther’s sin should have been considered full-fledged Gilui Arayos – (exception #2 to vechai bahem) and she should have given up her life – even if it wasn’t public!  The Baalei Tosfos answer that for the issue of Exception #2 (and thus exception #3 as well) – the Gemorah was well aware that the notion of “Karka Olam – the passive violation” – applies to both of these exceptions and therefore only chose to ask from the private/public factor.

DOES IT INCLUDE AVODAH ZARAH?

Rav Malkiel’s grandfather zt”l had apparently posed the question on Kesuvos 3b – as to why are women who are moser nefesh to avoid gilui arayos are called tznuos if they are violating halacha [since they fit into karka olam]? Rav Malkiel shlita answers that it is possible that the Rivam who is cited in Tosfos holds that one may be stringent and give one’s life up in non-cardinal Mitzvos as well.

Rav Chaim Soloveitchik states that according to the view of Tosfos – one does not have to give up one’s life in a case where the killing of others is a passive violation.  In other words, if the ones is where the  is about to use you as the murder weapon – throwing you on top of the victim and killing him – you are not obligated to give up your life to prevent it.  Indeed, in such a case, one can make the opposite argument – why is the victim’s blood any redder than mine if I am not actively violating anything?

RAV CHAIM’S VIEW OF THE RAMBAM

Rav Chaim, however, points out that the Rambam learns differently and nowhere does he draw any distinction between an active violation and a passive violation.  He makes no mention of karka olam – neither in Arayos nor in the taking of another life.

THE TWO VIEWS OF “WHY IS YOUR BLOOD ANY REDDER?”

Rav Chaim presents two possible understandings of the concept of “why is your blood any redder than his” within the Rambam.  The first view is that one must always remain passive.  The second view is that there is always an obligation to give up one’s life rather than cause the death of another – even if the causing is only indirect.

Rav Chaim cites a Gemorah from Bava Metziah 62a to prove only that when saving a life we apply the dictum of VeChai Achicha Imach – that your life takes precedence.   There, the case is where two people are in the desert and one has a container of water but it is not enough for both to survive.  The pasuk of veChai achicha imach is applied to say only when you will also live are you obligated to give him the water.  It is not a case of murder, however.  We see, therefore, that the idea of your life taking precedence – does not apply, however, when dealing with the prohibition of actually taking of life of another person – even if it were passive.