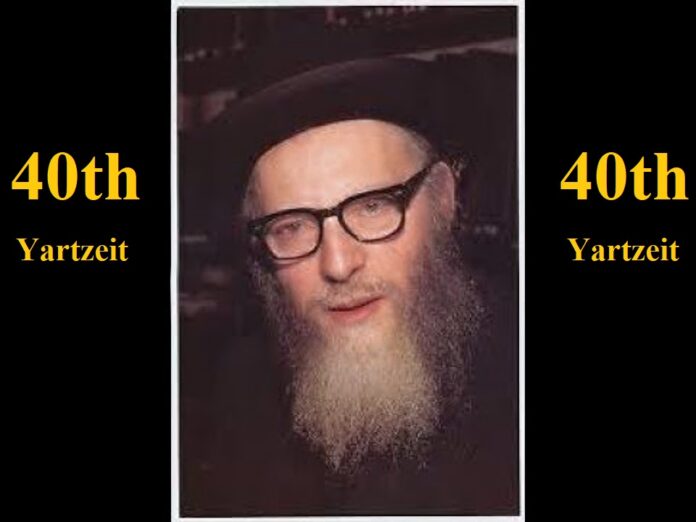 This Shabbos, The 3rd of Tammuz, marks the 40th Yartzeit of Maran Rav Schneur Kotler zt”l.

Rav Shneur Kotler zt”l (1918-1982), was the second Rosh Yeshiva of Beis Medrash Gavoah in Lakewood, New Jersey.  He grew the Yeshiva from a few hundred bochurim and yungeleit to well over 1000.  Rav Shneur zatzal sent out Kollel yungeleit across the country, from Philadelphia to Los Angeles.  Under the leadership of Rav Schneur for twenty years, BMG has become one of the pre-eminent Torah institutions in the world – indeed, throughout history.

Rav Shneur zt”l would often quote a Yerushalmi (Shkalim 2:5) that states: Whoever says over a shmuah (saying) from his Rebbe should concentrate and envision that his Rebbe is standing right there before him.

“We see from here that it is not sufficient just to say it over in his name.  Rather, it is demanded of us that we see him right in front of us as if he is hearing it now from him.  The explanation of this is that words are not some separate item or matter.  They are part and parcel of his life and his very essence!

The saying and the person who said it are one and the same.

Understanding his saying and truly receiving it can only be accomplished through seeing the person who said it.

Without the sayer – there are no sayings.

And from the sayings, one can learn about the sayer himself, and through them – we can appreciate the personage of the baal hashmuah and the lofty spiritual nature upon which he stood.  Studying the sayings lead a person to unprecedented growth – approaching that of his Rebbe from the perspective of, “When will my actions reach those of my father’s.”

In honor of Rav Shneur ztl’s yartzeit and in honor of his remarkable accomplishments in transforming the Torah landscape, we publish some of his thoughts and sayings.  They were culled from close talmidim, family members, and from his maamarim.  May his holy neshama be a meilitz yosher for klal Yisroel.