HaGaon HaRav Gershon Edelstein sent a letter of nichumim to the Glustein-Ehrenfruend families on the loss of Shoshana Raizel a’h, 40, and her two daughters, Chaya Sora, a’h, 7, and Chana, a’h, 2, in the terrible accident on Rechov Shamgar in Jerusalem on Thursday night.

Shoshana Raizel, a’h, was married to HaRav Dov Glustein, the son of HaGaon HaRav Yisrael Glustein of Yeshiva Mir in Jerusalem, and was the daughter of HaGaon HaRav Yaakov Alexander Ehrenfruend, one of the founders and leaders of the Chareidi kehilla in Ofakim.

“We’re unaware of the ways of Shamayim but in a tragedy such as this, the question is asked, ‘what is this that Hashem has done to us?’ because what happened was not intended only for the family but for each and every person,” HaRav Edelstein wrote.

“And it’s brought in the Gemara (Kesuvos 8,2) about one of the Amoraim whose baby died. Another one of the Amoraim came to comfort him and told him יחשיב את לאת פוסי אדרא and Rashi explains: ‘You’re considered chashuv enough in Shamayim for you and your children to be punished for the generation.’ That is, the father and all the family members are considered chashuv for their tzaar atones for the generation and arouses them to do teshuvah. And through the fact that we’re awakened to introspect and search our ways and deeds and not be distracted from the matters that require tikkun – this is a comfort to the chashuv families – that your tzaar is important enough to atone for the whole generation.”

“And therefore the obligation of the tzibur is to awaken ourselves and do teshuvah and correct our ways and our deeds and increase our zechuyos. And each person is aware of their deficiencies, of what needs to be corrected. The ikar is to be mechazeik in the three pillars of the world – Torah, avodah and gemillas chasadim. And specifically now, during Bein Hazemanim, one should be mechazeik in Torah. Each person should increase what he can according to his kochos – the value of even just another few minutes [of learning Torah] is inestimable.”

UTJ MK Uri Maklev paid a shiva call on Sunday evening to the family in Ofakaim, Kikar H’Shabbat reported. While he was there, Harav Ehrenfruend burst out crying and related how they heard about the travesty. “We heard about a accident. At first, we didn’t pay attention – we thought it was an accident that happened two days earlier. We turned on the radio and heard that there was a terrible accident, we still didn’t realize it had anything to do with us. Suddenly there was a knock on the door, it was Reb Chananya Chollak. I shouted toward him: ‘You don’t need to say anything, I know already.”

[Rav Chollak, the founder of Ezer Mitzion is active in the heartbreaking but necessary task of informing relatives of the deaths of their loved ones.] 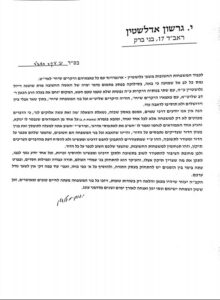