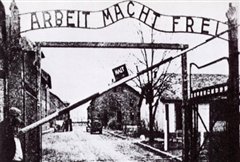 Each year on this day the world comes together to commemorate a barbaric crime unique in human history. We recall six million Jews and millions of other innocent victims who were murdered in Nazi death camps. We mourn lives cut short and communities torn apart.

Yet even on a day of solemn remembrance, there is room for hope. For January 27th is also the day Auschwitz was liberated 69 years ago. The noble acts of courage performed by liberators, rescuers, and the Righteous Among Nations remind us that we are never powerless. In our lives, we always have choices. In our time, this means choosing to confront bigotry and hatred in all of its forms, especially anti-Semitism. It means condemning any attempts to deny the occurrence of the Holocaust. It means doing our part to ensure that survivors receive some measure of justice and the support they need to live out their lives in dignity.

On this International Holocaust Remembrance Day, Michelle and I join the American people and our friends in the State of Israel and around the world as we reaffirm our obligation not just to bear witness, but to act. May God bless the memory of the millions, and may God grant us the strength and courage to make real our solemn vow: Never forget. Never again.