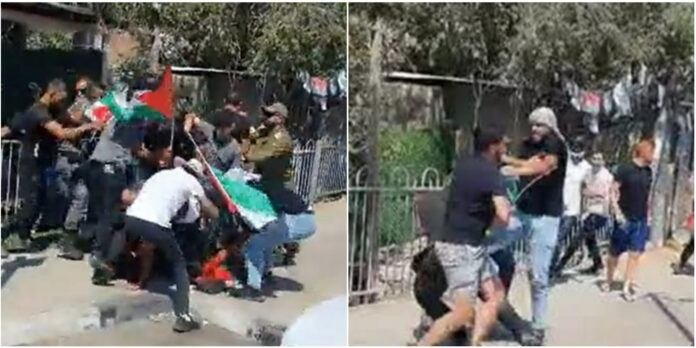 A group of Arabs violently attacked a Jew holding an Israeli flag near Kever Shmuel Hanavi on Friday afternoon.

A video of the incident that spread on social media shows a number of Arabs attacking two Jews, one of whom fell to the ground and was violently beaten.

Border Police officers who quickly arrived at the scene were also attacked before dispersing the crowd.

On Motzei Shabbos, the police announced that they arrested five Arabs who allegedly took part in the violence.

Many public figures commented on the video, including opposition leader Binyamin Netanyahu, who said: “National honor is not a luxury, and its absence will cost lives. The attempted lynch at Kever Shmuel Hanavi is shocking – dozens of Arabs violently attacking a young Jewish man after he waved an Israeli flag, kicking and punching him all over his body as he’s lying on the sidewalk – and all this in front of police officers.”