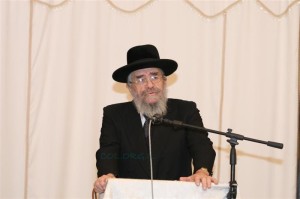 During a yahrzeit seuda for his father ZT”L on Monday night the eve of 27 Shevat 5774, Mora D’asra of Bnei Brak HaGaon HaRav Yehuda Leib Landau Shlita addressed the many tragedies that have befallen Am Yisrael of late.

The rav said that among other factors that have contributed to the current situation is the disgracing of an agunah. He explained that in his opinion, the attacks against Gedolei Yisrael Shlita and the mistreatment of the agunah have resulted in the many tragedies R”L.

Persons in the rav’s circle explain he was referring to the chasenah of a woman in the city who some claim was contrary to Halacha for she is still married to a man in New York. The rav explained that some rabbonim were opposed to the chasenah while others were matir it, and ultimately, it was held in Malchus Hall in the city with the participation of prominent rabbonim from the chosson’s chassidus.

The rav continued “Little people who understand little regarding gittin and kiddushin then began threatening rabbonim who permitted the chasenah. What do they want, to permit the woman to remain an agunah so she can never marry? Where have we heard of such a circumstance, where people threaten rabbonim because they do not agree with their psak? Will they dictate to the poskim how to rule in matters of Halacha?”